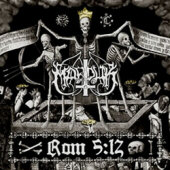 I admit, for the longest time, black metal has never really done much for me. While most of the genre I could easily just flat out ignore, there are a handful of bands that I really like and admire (Emperor comes to mind) but Marduk has always been at the very top of my list. Ever since I heard Panzer back in the day, I have followed this band quite closely. And while they have done some stellar work in the past, this is the album that made me think "Okay, this isn't just good anymore, this is fucking amazing."

ROM 5:12 encapsulates everything I love about Marduk. There is really no messing about, on this release the band seemed extremely focused with a big emphasis on song writing quality. Production wise, this is the best sounding Marduk album ever in my opinion. While it sounds polished and clean, it's also dirty and raw. It's not sterile, it's full of dynamics and life, and it just sounds amazing. It fits the overall vibe of this album, and if I had to describe the album with one word, it would simply be "evil" - the album just oozes it, from every punctured sore and wound.

I know that sounds cliché, but it's true. That's what I get from this album - the riffs, the relentless drumming, the excellent vocals and outstanding lyrics. The riffs are crafted masterfully, sometimes simple, sometimes complex, but always there supporting the song, and playing to its strengths. The lyrics are easily one of the highlights of the album. While being anti-religious, it never retorts to childish ramblings in the vein of so many other black and death metal bands. They are extremely well written, thoughtful, poetic.

Thou fair one, behold these bones.
Thou learned one, see these empty skulls.
Thou wealthy one, consider this dust.

People sometimes complain about the slower tracks on this album, but I personally really enjoy those as well. They give another dimension to the album, and far more character. If this was just nonstop speed, trust me, the fast songs wouldn't have the same impact anymore. After a while you just get numb to it. Here, it's not like that. You are given room to breathe between the chaos, and that in turn makes the chaos that much more powerful when it arrives. The intervals between the madness provide some nice peaks and valleys and most importantly, a whole lot of atmosphere.

All of that said, I firmly believe that the best track on here is "Accuser/Opposer", easily the most dynamic song on the album, and perhaps from the entire Marduk discography. In my eyes, an absolute masterpiece which to be honest, didn't really sink in at first, but when it did the effects were undeniable. Just absolutely untouchable in how good this song is written, arranged, and performed.

"I ate of Death to cleanse my flesh of God."

This isn't your run of the mill, moronic black metal album with constant blast beats and unintelligible lyrics. It's a well thought out, intelligent release, which also retains the integrity, power, and aggression of Marduk.

Not to be missed.

Any band has its diehard fans and dieharder antagonists, but in Marduk's case, it goes to a different level. No matter what album they put out there, it stirs up a storm of controversy and brings new blood while letting go of the old followers. To me, personally, Marduk cannot go wrong and in "Rom 5:12" case, they took all the right steps and did all the right things to simply record the best Marduk album yet.

All the way from the first clicks to the last moments, Marduk will not let you go. Gripping, amazing and continuous high performance with intros, outros, guest appearances, variety in speeds and tempos, primal and raw, epical, addictive and catchy. Absolutely powerful album, full of songs with identity, groove, speed and blasphemy that Marduk is known for. Definitely diverse, more mature, but at the same time standard in all dimensions.

New opus is an impressive proof that they are not done yet, and we can expect more progression, even though it's all based on the same old formula. No matter what other people say I think Marduk will surprise us many more times and that's simply fine by me.