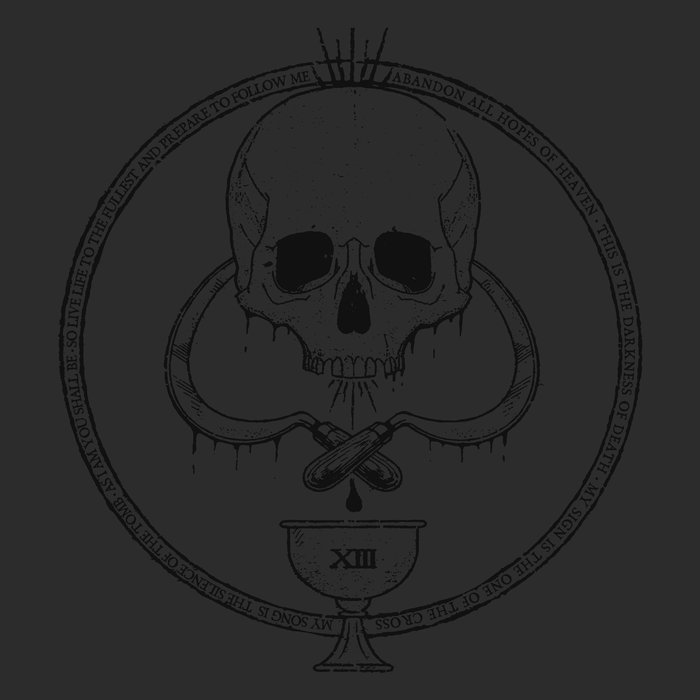 While Norway will always be the birthplace of second wave black metal, and has continued to be a wellspring for both the active old guard, and some new and fresh acts. The focus on black metal nowadays is more broad, so there’s not as many eyes on Norway today, as there were in the mid 90’s. However, that doesn’t mean the country isn’t relevant, nor does it mean, extreme metal isn’t still a force in Norway, which brings me to Ritual Death, the black/death project by Wraath, aka Luctus, a seasoned black metal veteran from Norway and also guitar player from Behexen since the mid 2010’s, who alongside other like minded veterans from the still thriving Norwegian scene, conjured forth their long anticipated, self-titled album, and released through Shadow Records/Regain Records.

This particular band was formed back in 2016, and has remained a true cult, and underground entity, releasing a handful of EP’s and splits sporadically, but nonetheless displaying a gritty and relentlessly bleak and occult style of black and death metal that remains stubbornly in the old ways, while still presenting unique ideas. And that’s still very much the case with the self titled debut, albeit with a less primitive production. Obviously having a more polished production might be a downgrade for some, especially with Ritual Death’s particular brand of droning, grim and raw black/death, however, not only has the band managed to keep their grit intact, but they also used the more professional production to enhance their occult atmosphere.

The big way they accomplished this was first and foremost with the clearer presence of keyboards. Band member H. Tvedt has made use of them before to great effect, but here, thanks to the better production, not only do they sound better, they have a bigger impact on creating a truly ominous and ritualistic atmosphere, (which H. Tvedt has always excelled in past bands). The same applies for the guitars and bass, aside from sounding clearer and less murky; Wraath and Lord Nathas stringwork is more piercing and pulsing respectively. The droning and hypnotic riffs with the pulsing bass evoke the same brutality as Blasphemy and early Beherit, yet both Wraath and Lord Nathas inject traditional black metal atmosphere to add a sinister layer of occult darkness, which when the keyboards enter to enhance the ambiance, adds a true sense of dread. All this then fully rounded by the drums and vocals, the former which is handled by Nosophoros of Mare, who is no stranger to cavernous and obscure metal, he applies that same primitive and ritualistic style of drumming here, but with more technicality, as he not only relies on blast beats and fills, he effortless speeds up and slows down when needed, and that’s an underrated aspect of his drumming, which is simple, yet technical, primitive, but solid, and in turn, it gives the songs a strong backbone to keep the pace. And finally, the vocals, also by Wraath, the man’s resume in various black metal bands speaks for itself, and in here, his vocals while on the raspier and growling side, excellently fit in with this style and truly complete the sound and atmosphere, and he manages for his vocals to be an in-between of the shrieking vocals of black metal, and the gutturals of death metal.

The final aspect to highlight is the performances, individually all members are excellent and have been in various projects to prove it, and in here, not only do they have a strong sense of unity, but they also complement each other, while also standing out in key moments, so it's a really collaborative album while also letting each member have their moment, and this ends up also applying to both the compositions and overall pacing, as this is a lean record with no filler, obviously maintaining the “true kvlt” ethos of keeping the music primitive and straightforward, which then opens up avenues for the band to enhance the music, which they did. Overall, Ritual Death did not disappoint, and crafted an excellent record that has one feet in the past, and the other in their own timeline, which successfully spawned a record that feels ancient yet timeless, as death itself.

Best songs: 'Lunae', 'Darkness Of Death', 'The Pale King', 'Nothingness Without Emptiness Within'