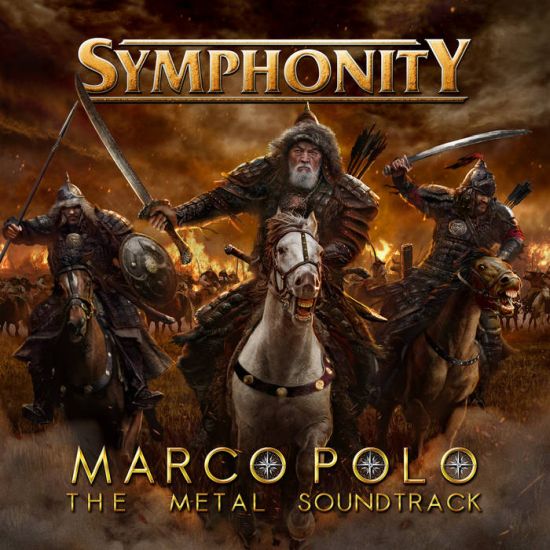 Initially I was excited over this release - most Chinese knew the story of Marco Polo and his famed travel, with which he inspired such a fascinating image of the western world that it may or may not led to the invasion back in the Qing Dynazty. Now, while the war is more in the line of Sabaton, Marco Polo's journey could well work as a solid inspiration and fresh alternative to any old school power metal band - just think of how many concept albums we've heard on the quest of a brave young warrior for power and glory and you'll see the parallel lines. With Marco Polo's expedition in HangZhou, I was indeed sort of anticipating some reference to China. And even though I was skeptical when I saw the album named "A Metal Soundtrack", I had heard enough of Symphonity's former works to trust them not to turn overmuch Disney-ish. Unfortunately, I was disappointed on both points.

Marco Polo's quest started from Venice, hence our listening experience starts from 'Pt. 1: Venezia', a voice-over introducing the cause and beginning of his journey - with a bloody soprano to boost the atmosphere. Already this is sounding like the opening of a random disney movie. But then we proceed to 'Crimson Silk' and 'The Plague', both heavy banging tracks with a certain amount of eastern folk vibe. My opinion immediately improved, as both numbers continued their former slick neoclassical style and I held no complaint over the epic orchestra - so far, they're consistent.

Then followed 'The Love Theme', a short instrumental piece in lieu with the intro in terms of melodies and supposedly described Marco's "short love affair which happened during these dark times". Afterwards we have the most brilliant, most magnificent track on the album. The 10-min 'Mongols' hits listeners head on with crunchy riffs, hooking bassline and pounding drums after an almost cinematic opening. The glorious and literally soaring chorus proceeded not without a sense of The Seven Angels's epicness and unity, then the solo took a rather oriental twist - this might well be a sample of the folk songs from JiangNan. I am fully convinced that this is the best song of their whole discography.

After Marco Polo's adventures with the Mongols, he started to feel homesick, so the piano ballad 'Dreaming Of Home' sang of his feelings and brought one back down to earth after the aforementioned soaring epic with its slower tempo and soothing melody. Fine by me, for the next track 'I Found My Way Back Home' struck up the speed and dynamics again, being an fast and almost Stratovarius-ish power metal anthem.

But then followed another piano ballad 'Prisoner' which just dragged the momentum down. And everything ended somewhat abruptly with 'Venezia Finale', another narrative piece that only mentioned in passing how Marco Polo "longed to return to China" and referred back to the intro concerning melody. Yes, the symmetrical sense is achieved, and it's a rather common practice for power metal albums to end with ballads. But at this length the feeling of being left hanging in the air is inevitable.

The fact that this is a 40-min album of nine tracks with the complete arrangement of an intro and outro and an instrumental piece, not to mention two fucking ballads, is simply frustrating. I was all prepared to call this LP a grand comeback after 7 years, yet this just fell flat and struck me as a lack of inspiration. Mind you, the genuine power metal numbers are all fucking briliant. And all the musicianship here is sound - I highly doubt if any power metal fans can resist such a solid bassline, fast and furious drums, fluent solos and catchy choruses. And despite their inability to hold on to the same vocalist for two albums, the new mikewielder Konstantin Naumenko is obviously on the same par as their former ones. I liked him well enough when I'd come to the conclusion that his tone is along the lines of Jorn Lande And Herbie Langhans. The orchestra adds well enough to the epicness, though at certain points the Disney energy still lashed out too strongly.

Ultimately, I felt that this release is just trying too hard to achieve the feats of a movie soundtracks, and their so-to-speak metalness rather fades into the background. Take the ballads for example, they somehow managed to sound exactly like the declaration of any random disney protagonist. The album is, in my opinion, only saved from falling too low by track like 'Mongols'. All in all, I am of the opinion that metal and soundtracks should leave each other alone unless you can balance them out really well.