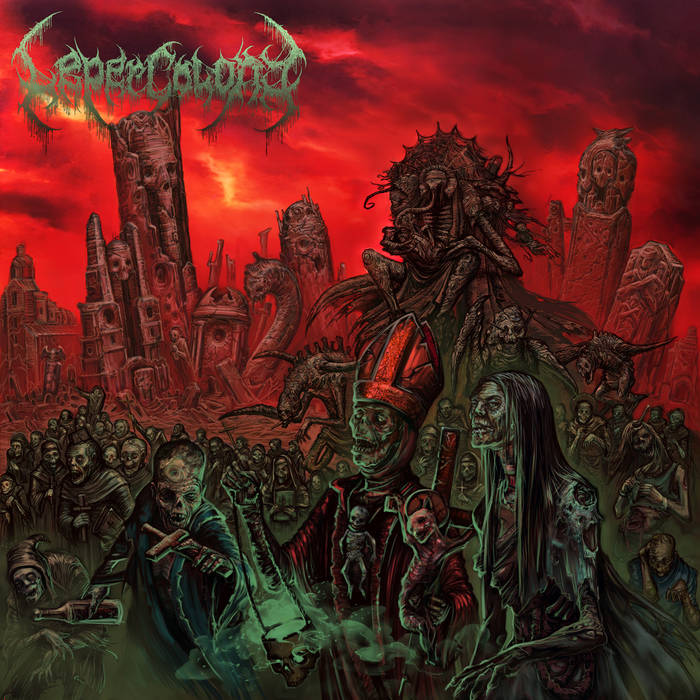 After the Frozen Dawn album I reviewed not so long ago the self-titled debut of Leper Colony is another killer stuff released via Transcending Obscurity Records. I don't know where one of the guys, namely Rogga Johansson (if I would mention all the bands he is involved in here this would break the mold), gets all the ideas for his music but this band is really convincing. Together with Marc Grewe as vocalist (ex-Morgoth, Insidious Disease, Discreation) and Jon Skäre (Consumption) on drums they have created a very fresh and entertaining death metal breaker.

Starting with 'The Human Paradox' you can smell the early 90s vibe that Morgoth spread back then. The riffing reminds very much of “Cursed”-era and the vocals of course, too. But Rogga and co don't focus on only one band to worship but many more. The album is like a ramble through diverse groundbreaking albums of back then. 'The Surgical Undeadvors' sounds like Death's  “Leprosy” and “Tar And Feathers” is just a pure “Hell Awaits” Slayer worship. Marc's vocals sound so fucking aggressive and powerful that it's just a great joy to listen to and the songs are an absolute fantastic death/thrash grinders that crush everything to the ground. But with 'Rapture Addict' they also have some more groovy stuff (with some more technical Death borrowings) and here the band shows again how skilled they are with their instruments. The title track is the most atmospheric song on the album starting with some pretty gloomy tunes and painful screams. Mostly kept in some mid-tempos the song unfolds some really uncomfortable feeling – and again Marc's vocals are so goddamn sick that it's hard to believe that the guy is already over his 50s. After this short atmospheric intermezzo they loosen the parking brake again and perform three more killer tracks. 'A Flow So Greatly Macabre' is just a flow of killer riffs and sheer brutality, 'Flesh Crawl Demise' is their fastest and maybe most unmelodic track (again with some cool Slayer-riffs and a homage to German Fleshcrawl and their deceased vocalist Sven Gross maybe?) and the closer 'Gruesome End' (great title for the last album track!) is a pummeling ass-kicking track with some punkish vibes here and there.

Production is very tight and full of energy and after listening to the album for several times now, I cannot find any flaws in it actually. The performance of the three guys is absolutely stunning, especially the vocals bat the shit out. The only point of criticism is the total running time of 33.33 minutes which is much too short for this album. Leper Colony is over way too fast so you don't have another option but to press the repeat button on your stereo.