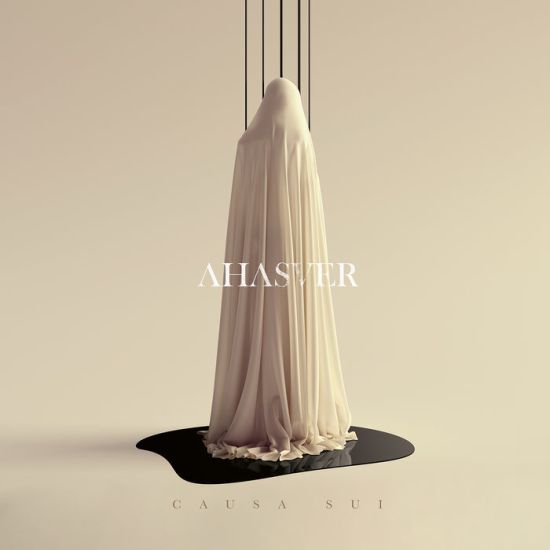 On paper, the concept of a supergroup is a winning recipe. Talented musicians from different, already existing bands, are coming together to make something new. That being said, if you were to ask me what my favorite supergroup is, I’m not sure I could even name five of them. Of course, there are classics, like Bloodbath, that cannot be avoided, but other than that, I would have to think about it. Now enters Ahasver, a completely new band from France with members of many different bands. When I got the promo copy, it only said progressive metal from France, so of course it caught my eyes. But I don’t think I was ready for the sheer power of this album.

First things first, let’s talk a bit about the lineup. The band consists of Nicolas Bastide on vocals, from the band Drawers, a sludge metal band from Toulouse, France. On guitar and providing backing vocals, Mickaël André from the band Eryn Non Dae, an atmospheric metal band also from Toulouse, France. For the other guitar and backing vocals, we have the one and only Julien "Nutz" Deyres from the band Gorod, a technical death metal band from France. On drums, Théophile Astorga and on bass, Victor Minois; both guys are from, you guessed it, France. On Causa Sui, their first album, Ahasver offers us a powerful, complex, groovy, sludgy and intelligent album.

First of all, we need to talk about musicianship. From the vocals to the guitars, every musician delivers a masterful performance but, what truly stands out all throughout the album, is the rhythm section. The drums are ingenious, there is everything from tight slow grooves to furious blast beats and all of the complex fills you can dream of. I particularly enjoyed the sound of the tums, sounding deep and grand. The cymbal work is another highlight, technical and smooth. I’m not a musician, but I love drums and, anyway, I’m pretty sure I heard odd time signatures and a great use of ghost notes here and there. As for the bass, one of my notes was simply: THICK! What I like about progressive metal, is that the bass does not just play a role in the background but is as, if not more, important than the guitars. And again, I have to mention the bass tone. It’s so thick and yet completely audible. When played through nice speakers, you’ll be enveloped in pure and low vibrations. It’s really something else. On vocals, Nicolas Bastide provides a harsh, screamed vocal type, really traditional of sludge metal. Think Scott Kelly from Neurosis, but with a hint more of hardcore. Since Mickaël and Julien also provide their voices, a bit like Mastodon, vocals on this album are extremely varied. You have screamed harsh vocals, but also clean singing, and even a bit of lower death growls. It’s not really clear who sings what, but I imagine Julien is the one providing the growls, since he is from a death metal band. The death growls provide a nice heavy punch whereas the cleans provide atmosphere and a bit of melody. I think that, many times throughout this album, two or all three guys sing together, giving rich layers to the vocals. I also absolutely love the guitar tones; it reminds me of "From Mars To Sirius" era Gojira. Nice and heavy, but can still be heard clearly though the mix. Ahasver also adds, quite frequently in fact, a lot of dissonance with the guitars. It really adds a lot to the atmosphere, giving a feeling of uneasiness to the music. You can make a lot of comparisons with Gojira: they focus more on atmosphere, grooves and heaviness while still bringing a lot of technicality and musicianship. This means no crazy guitar solos. So, if you like your progressive metal that way, you might not enjoy this album. But basically, if you like Gojira or early Mastodon, you will most definitely like Ahasver!

There are many highlights on this album, so I’ll go through some of my top tracks, starting with 'Peace'. Unlike its name, the beginning of this song is far from peaceful. It starts with a furious blast beat and harsh vocals but shifts rather quickly to a slower and groovier part with clean vocals. The entire song follows this recipe of slower parts interspersed with faster and heavier grooves, with a dash of short bursts of dissonant notes. I can’t really talk about songs without talking about the lyrical content. The album is based on the legend of the wandering Jew. Basically, in the story, a man was cursed to walk through a desert until the return of Christ. So, in other words, forever. They use this story as a template to talk about many social and personal issues by telling the tale of a man’s journey towards atheism. One of the lines in the song goes like this: “If I could see my endless path vanishing away. I'd stare at the sun and wait to be free again”. Later in the song they repeat a phrase: “Nee Deus Nee Dominus Nee Domus” which is Latin for, no God, no master, no home. The phrase was first used by socialist Louis-Auguste Blanqui in 1880, when talking about his revolutionary ideas and later was picked up by anarchist groups as their slogan. Anyway, all this to say, you can see the main character starting to slowly question his faith during his journey. Dust starts crazy fast and brutal, but quickly changes in a slower but infectious groove. You get everything on this song: heaviness, grooves, insane drum and bass work, heavy breakdowns and even a bit of melody, when he sings these lines: “The way you feel alone, your entire life is flailing, chilling your backbone”. You can truly feel the pain and anguish throughout his voice. It’s quite moving! To finish my top three: 'Path'. The slower, ethereal notes of the beginning can be deceiving, giving you a false sense of security because, without notice, every instrument kicks in like an explosion. The song has a nice buildup leading to the catchiest chorus-like part, where he repeats the lines: “There is no God over your head, there is no answer, there is no reason to your quest, only love that you can take”. Lyrically, this is the point where the main character is losing his faith and trying to come up with his own reasons to live. If you close your eyes at the end of the song and listen carefully, you can clearly hear that Mastodon was an influence on them. I also need to talk about the album closer, 'Kings'. The song is still really good. It features everything that makes this band incredible, it’s sort of a summary of the whole album. Lyrically, it’s anti-monarchy and antiwar, with lines such as: “Kings taking life to live, what they need, what they deserve, Spilling the blood of their own with nonsense”. It’s a powerful statement, that is all so true, especially today. The only complaint I have with this song, in fact - I think it’s my only complaint about the entire album - is that, at the end, they play a two/three minutes audio of a speech from Carl Sagan. It certainly fits the themes of the album, but I don’t know, I’m not a big fan of spoken word samples in music. At least, it’s at the end of the last song, so it doesn’t cut the album in a weird way.

To conclude, it looks like many talented musicians came together to create a new band and make an album that was specifically targeted for me. Ahasver is a gift from the metal Gods (and yes, I get the irony of saying that) for us metalheads that like our metal proggy, heavy and super thoughtful. For fans of Gojira, Mastodon or Neurosis, this album is an absolute must. I truly hope they have a long career and start touring one day and maybe open for Gojira! Hey, a man can dream!