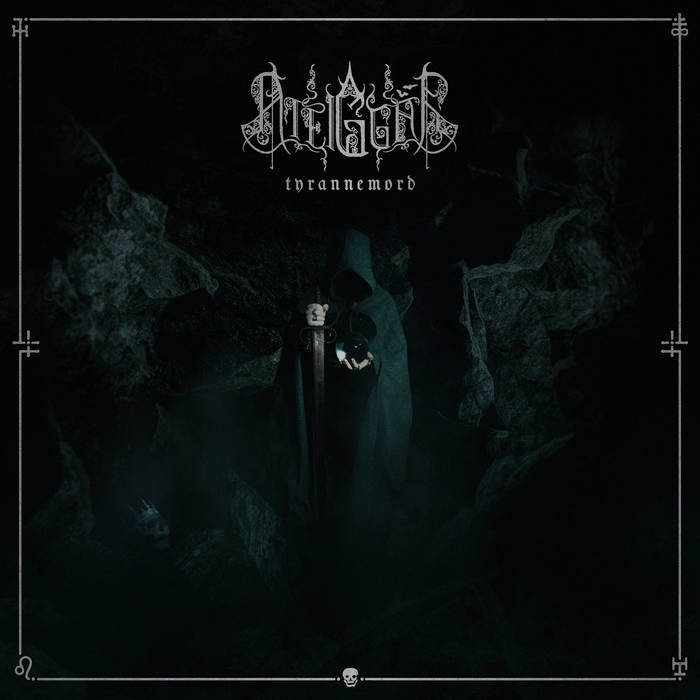 Ateiggär is of course one of the many projects from The Helvetic Underground Committee, known for acts like Ungfell and Dakhma, and for also being a collective of eclectic extreme metal bands, and where Ateiggär is concerned, they play pure, true cult black metal in the style of early Satyricon and Kvist, that is to say, a very melodic and epic style of black metal that features varied songwriting and extensive use of keyboards and orchestral arrangements. The band displayed that style and with their own flare very well on their 2019 EP, and now that they're presenting a full length LP, the stakes are higher, and I can safely say that Ateiggär did not disappoint and this record is their definitive statement wherein they completely shed their influences.

Much like the debut EP, Tyrannemord is also a concept album, which accounts the assassination of Byzantine ruler Leo Armenius V, on a palace's chapel, while also drawing influence from the works of German poet and playwright Andreas Gryphius. And indeed, the band have very lofty and grandiose themes and concepts to enrich their music, and on that regard, they absolutely deliver black metal that's equal parts unrelenting and majestic. Fauth Temenkeel has often proved himself to be a versatile and dynamic songwriter and musician, and with Ateiggär, and especially on this record, his mastery of the subgenre and more esoteric influences truly shine. His guitar and bass work in particular is the most striking, his melodic and oppressing riffs and basslines form the backbone of the songs, and what's more impressive is how the strings for the most part are on the lower scale and the heavier sounding side, and feature a growling and exceedingly thick sound, the keyboards and synths do most of the heavy lifting when it comes to melodies and embellishments, and all this is rounded by his vocals which are on the guttural and echoing, from beginning to end, Temenkeel never lets up, and it gives this very symphonic record a true grit and rawness that other "epic" or symphonic black metal records often discard or lose altogether due to a sterile production.

That being said, while Fauth Temenkeel does have the lion's share of the instrumentation, his partner in crime, Fauth Lantav is by no means a slouch, the man has long proven himself to be a superb drummer, and his work speaks for itself, and that is still the case on this record, and more impressively, Lantav's drumming is the backbone of all the songs, his fills, rhythms, blast beats and double bass are fiendishly effective throughout and their absence in key ambient moments have more impact when they come back.

The last aspect to mention is the production, The Helvetic Underground Committee have always had a knack for producing black metal that's both professionally made but without diminishing the grit of black metal, and that's still the case for Tyrannemord, all the instruments are clear sounding, and the performances are excellent. The most interesting aspect however is the in-studio trickery, like the reverb and delay on the drums, distorted flanger guitars in bridge sections, and even samples of birds and choruses, and all of these elements complete the atmosphere of the record which also enhances the music and fully embodies the concept and themes in the lyrics, and while I don't speak Swedish German, the idea of a regicide within a house of worship does come across from the music. The only real critic I can offer is that the album is a bit uniform and falls a bit into monotony, but only by inches and through repeated listens, and given how ornate and massive the music as a whole is, I wouldn't recommend listening this record on repeat but that's just a disclaimer.

Overall, Ateiggär have truly nailed finding their sound and creating a massive album that's both vintage, yet fresh, with both ambitious songwriting and superb performances, this is not just a great addition for the Helvetic Pantheon, but a great record to listen on its own.