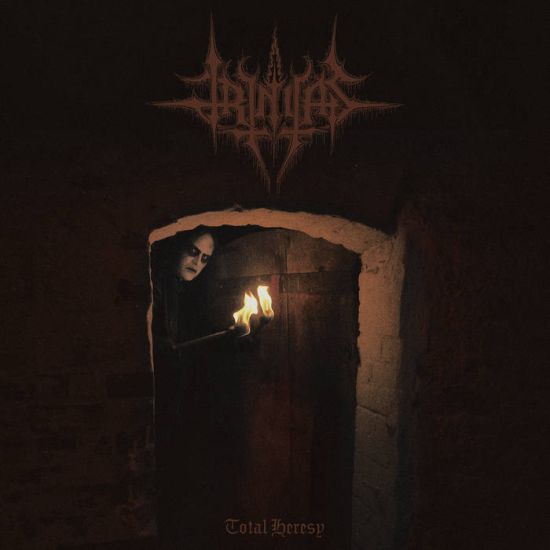 Type: Full-Length
Release Date: October 18th, 2022
Label: Ván Records
Genre: Black
1 Tomb Of The Misanthrope
2 Pyroclastic Crucifixion
3 Trinitas, By The Unholy Sign Of The Three
4 Supernova Lucifer
6 Rite Of The Necromancer
7 Dust And Shadows
8 A Hail To The Realm Of Cernunnos
9 Total Heresy
10 Morgwyn, Burn In The Night

Trinitas may not be known by many people in the black metal scene because they only released one EP in 2019. But if you take a look at the band members you will know for sure that this won't be a lame duck – main man Vargher (Naglfar, Ancient Wisdom, Throne Of Ahaz, Bewitched (I want a new album!!!!) playing guitars, Tormentor (Asphyx, ex-Desaster, Carnal Ghoul just to name a few) on drums and Azatoth (Gràb, ex-Dark Fortress) on vocals and so here we go with their first full-length album called Total Heresy which was released by Ván Records.

We can find a lot of classic Swedish black metal tunes on the album which clearly wear the fingerprints of Vargher (a lot of melodies are quite similar to his former bands, a lot of atmospheric, mid-tempo- laden sounds). Sometimes it is a kind of dirty bastard between some doomy and black sounds. Azatoths grimy vocals sound very sinister and give the nine songs a very devilish atmosphere. The drumming is powerful and really kicks ass, Tormentor's timing is impeccable and he does a very good job here.

Starting off with slight diabolic spoken words and a very gloomy atmosphere the Swedish-German collaboration opens the 'Tomb Of The Misanthrope' and unleashes a very catchy black metal inferno. The melodies are very repetitive and hypnotic and absolutely comprehendible. A lot of catchy parts that really groove like hell make this song (and also the other songs on the album) a very entertaining black trip. Apart from the influences that Vargher drew from his own creations, we can find some more older influences such as Bathory (the beginning of 'Pyroclastic Crucifixion' is a pure Quorthon worship) or Celtic Frost ('Supernova Lucifer' – one of the most em… creative titles in '22, I guess) which is a very slow song with a lot of Swiss trademarks, starting from the guitars to the vocals. 'Dust And Shadows' is another piece really worth mentioning with some very twisted hook lines that kick ass and stand for the things that at least I liked in the past in all these bands that Vargher played in. But the fact that I mentioned some tracks in particular doesn't mean that there are some weaker tracks to find here. No, that isn't the case – the band has created a modern classic with Total Heresy for sure. I guess if it came out back in mid 90s it would be mentioned together with other classics like Dissection, Throne Of Ahaz, Bewitched (did I already mention that I want a new album???) and so far.

The production sounds pretty old school but not too shabby, it perfectly fits this kind of music. Powerful, a little bit muffled and tinny but this is pretty authentic and absolutely no mistakes in this case. It made me feel a little bit nostalgic about good old black metal days when the aforementioned bands had their heydays.

Rating: 9 out of 10 Bewitched points