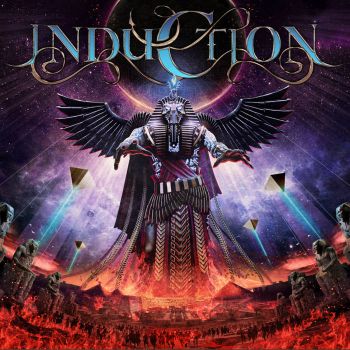 I came across Induction when I was browsing Kai Hansen’s artist page here on the Archive, seeing it listed as one of his guest sessions. Then I noticed his son being the lead guitarist of the band. Now, that piqued my interest. But at the same time I was apprehensive, since the Archive tagged it as "Progressive Symphonic Power Metal" back then; it seems to be changed to regular SPM now. Usually, I prefer simpler and more aggressive stuff, so just prog power or symphonic power alone would put me on alert, not to mention the two of them put together. Still, I was properly intrigued by the presence of Tim Hansen - might he carry on his father's legacy? So I had given this release a chance. And I was promptly impressed. Although this is no old school power metal, this is nevertheless, a solid slab of symphonic prog power that is well worth the 1 hour playtime.

I did have my moments of skepticism when I heard that grand cinematic intro - oh hell, layering so much orchestra for just the intro tends to be a huge red flag in my books. But the following songs like By the Time soon assuage any doubts. Power metal has no greater glory than when the leads and hooks are speedy and melodic, the drums are pounding and the vocals are soaring on high. On occasions the orchestra is overwhelming, like that nauseatingly sweet opening and bridge on At the Bottom. That one was a shade too close to the Disney side for my comfort, but put in context it's still a fairly upbeat and grandiose track that managed to put on my face. Anyhow, for the majority of the playtime the orchestra is spreaded just enough to ensure the epicness. Indeed, there is power in power metal again.

At the same time, the likes of The Outwitted Consecration or The Riddle with their versatile rhythms, darker, heavier riffage, long technical solos and majestic orchestras and choirs would appeal to any prog power fans. At least I'm happy, despite my meager understanding of that side (I know only the bigger names, you know, the likes of Symphony X and Evergrey). My only complaint is that some of the tracks in the middle dragged out too long in the end. Songs like Hireath or Mirror Make Believe (My Enemy) could probably do without the long orchestral outro and end half a minute earlier directly behind the last repetition of chorus, attaining a sense of vigor.

As I was saying, my interest for this particular band started with Tim Hansen. While he is obviously not the main composer for this album - the band was originally named Martin Beck's Induction, duh - he is still an important contributor to what I consider as the fluency of an album. For prog power that involves slick, techy solos and little quirky hooks to pull my attention forward, all of which Tim Hansen managed to execute pretty sweetly.

I enjoyed their drumming immensely as well. From the second track I had been hooked by that fast and furious drumroll. Sean Brandenburg's drums is verily the backbone of the album and having a solid drummer in the mix always makes symphonic stuff last longer by my scale. Also, Nick Holleman has grown on me after a few spins, though I did not think much of him initially, since I had went for Mirror Make Believe (My Enemy) at first and we all know how hard it is to find a vocal in the genre who can hold his own ground against Kai Hansen. Yet to place Holleman somewhere on the spectrum, you might as well consider him as a more refined, more downtuned version of Christian Eriksson. He can soar high effortlessly with that pair of pipes, while his lower croonings worked well for that semi-ballad Hireath. I think I'll like any vocal as long as he can deliver a solid emotional ballad without too much soppiness.

While I'm usually not the biggest fan of either symphonic power or prog power, I can still appreciate a fairly balanced mix of symphonic and prog elements into speedy, melodic, epic power metal when I come across it. And although this is no old school EUPM, this is not disappointing in the least - it's probably better that Tim Hansen did not strictly follow his father's footsteps, but still gives us younger generations the hope that power metal will carry on into a new era.

Highlights:
'Pay The Price'
'Mirror Make Believe (My Enemy)'
'The Riddle'
'My Verdict'