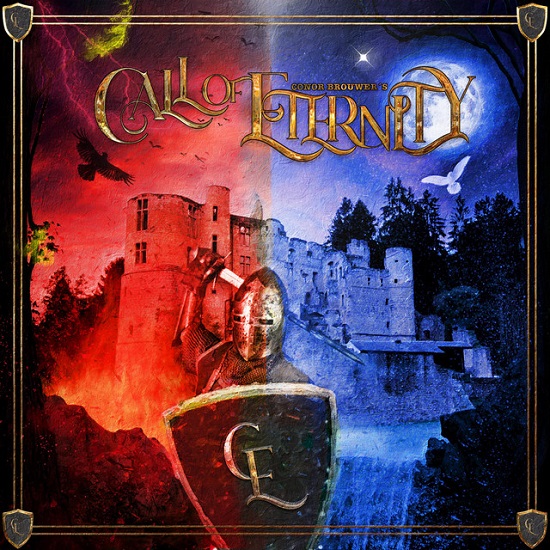 Another year, another metal opera. At least, that’s what style I think this album is aiming for. I mean, you’ve seen the creator’s name in the band’s name, right? That’s about as clear of an indication as the long list of guest musicians. Yet sometimes I cannot help but wonder if this format has come to saturation. Sure, some masterpieces appear from time to time - I’m still spinning that Valley Doom album from last year, and it’s not going anytime soon. But this one is definitely scraping the bottom of the barrel.

As usual we open with an atmospheric intro, a 3-min one at that. By the end of it my patience is suffering greatly, and some form of redemption only comes when the real songs start. From 'Gates Of Immortality' to 'In The Deepest Part Of Blackness', this release at least presents us with some adequate power metal. Be it the happy go lucky riffs in 'Wings Of History' that shows only too much Helloween and Freedom Call energy, or the sweet bit of soloing presented by none other than Roland Grapow himself at the start of 'Days Of Fallen Glory', the LP is quite impressive in its consistency at drawing its influences from the old maestros. What really grates on my nerves is the supposedly mood-inducing 'The Cold Destiny Of Tears'. For the love of gods, it doesn’t even have lyrics, just Anniken “ah”ing in a failed attempt to replicate some of Rhapsody’s epicness, but this one has no depth. Trust me, the following ballad actually sounds good in contrast to this one, at least that was emotional. But by this point the steam of the whole album is gone, and the quiet 'Eagles Fly Free' like anthem 'The Legend Of The Warrior' is just too brief to bring the tempo up again when it’s placed in between two ballads. Mind you, I did enjoy the bass on that song - I dig anything that reminds me even remotely of the Golden Age and a good power metal gallop will always bring a smile to my face. The outro was actually quite good and vibe with a low-key Rhapsody grandiosity. But by this point my patience is gone and honestly I think yours would be too if you have to go through two ballads in a 40-min album.

I will say it right here and now that my initial interest for the album stemmed from their list of guest vocals. Herbie and Ralf are busy bees these days, and their vocal works here are about as fun as they can get, their grittier tone perfectly adds to the release’s heaviness. And Henning is just the bonus. Okay, maybe their styles are all pretty close, but since when have you seen me complain about a band employing too many Germans? Tim Owens also absolutely ripped his track with his screams. Besides, Heidgert and Halen are probably Brouwer’s wisest choices, because they can actually carry those emotional ballads without sounding soppy. In fact, Halen downright owned the song he did with his soaring vocals - I wouldn’t be surprised if you tell me 'Land Of New Horizons' is a Insania song. Marius Danielsen is a pretty apt vocalist in himself, but compared to the others he is probably more of the second tier.

But the main voice of this album is its rawness; not as in rawness of production, but more as in immaturity of composition and arrangement. I do like a rougher edge to the guitar tone, and having the bass mixed as up front as this LP did is quite a surprise - it makes me all the more reminiscent of the Golden Age. But some of its transitions just sound disjointed. Case in point, the connection between the opening solo and the actual verse on 'Days Of Fallen Glory' is so abrupt it makes the track sounds like virtually two songs. Giving Roland a showy solo is reasonable, and having Herbie on the vocals is always something worth praising in my book. But you could at least try making the song sounds like a integrity, or you could make it into two tracks and I won’t even complain. Also, the Rhapsody wannabes that come out of the symphonic power side tend to be overdosed on orchestra. Although this one is no Twilight Force, the lengthy orchestral intro and outro are just as annoying as any thick layer of pipe organs. And 'The Cold Destiny Of Tears' is hands-down the lamest track I’ve heard in a while - Really? Who the fuck gave you the idea that having the female vocalist singing “ah” to the melody is a good way to build up a melancholic atmosphere? You could at least write some lyrics and follow that elven queen aesthetic or whatever.

Now this release is at least okay-ish - it has all the necessary components for a decent power metal album. It features some of my favorite vocals and its arrangement is at least interesting enough to hold on to my attention for most of the play time. Though I still don’t understand the use of three fucking instrumental tracks in a 40-min album. But this is my debut, and I’ll be less harsh with it. Maybe next time, try making more real songs to fill in the gaps.