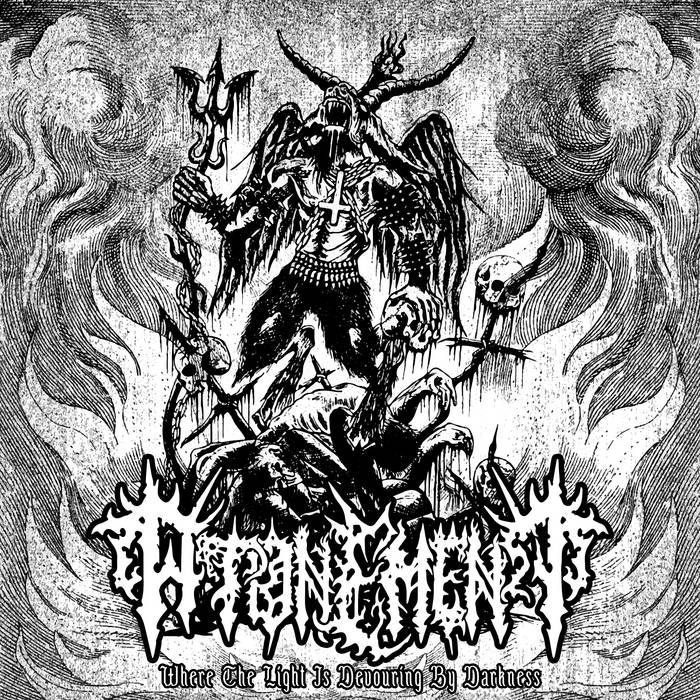 A lot has been said about Poland’s extreme metal scene, from the country’s titans Vader and Behemoth, the myriad of thriving scenes in that country alone, indeed, Poland is a consistent wellspring of extreme metal, which brings me to Atonement. They’re a new act who at the beginning of the year released their debut record Where The Light Is Devouring By Darkness through Mara Productions.

Since Atonement is a very recent band and doesn't have that much info beyond its revolving lineup with the exception of guitarist Predator and vocalist Almighty Blasphemer, I’ll get right into the music. The band plays blackened death metal in the vein of Profanatica and Archgoat, and they certainly deliver raw, grim and filthy death metal brutality with a blasphemous atmosphere, not to mention actual riffs to set a definitive barrier from run-of-the-mill war metal. However, while you can hear the similarities with those other bands, Atonement actually does have a significant difference and was something I wasn’t expecting going into this record, which is how the band’s sound is actually mid-paced and even sludgy.

After the appropriately unsettling intro track, and the first two tracks which do display Archgoat inspired bestial black metal, the band slows down and focus on atmosphere, and on top of that, guitarist Predator displays a very dynamic and even unorthodox guitar playing, while the whole album leans more into death metal, down to Almighty Blasphemer’s guttural and gurgling vocals, a lot of the techniques Predator and bassist Spirit Krusher employ lean into black metal. The obvious one are the riffs and long droning chugs, but Predator actually uses broken chords and odd time signatures, Spirit Krusher’s basslines are also much more experimental and even progressing in some areas, and without lacking any brutality or rawness, as they complement the droning and hefty guitars, and combined with the very calculated and intense drumming of Konrad Bińczyk, the band’s sound coalesces into a very, and for lack of a better word, grimy record, and a more detailed explanation is how the band plays death metal, with a black metal atmosphere.

Finally, I should mention the production, which, much like the overall instrumentation, leans into death metal. The production and mixing is very bass-heavy, which gives the already thick and lumbering sound a crushing sonic depth. All in all, while this sound may not be orthodox to both black or death metal, the band are not only committed to it, as well as succeeded in finding their niche, they also know exactly how they wanted this album to sound and feel. My one and only criticism for this record is the dreaded monotony that this type of extreme metal often gets, while the song are consistent and again, the band are truly committed to this sound, it feels very uniform at best, and one note at worst, while I can admit I’m not the biggest fan of super brutal and grimy death metal, and the band do display much more variety than the average deathgrind or war metal band, I would still only recommend this to people who are already into, again, super brutal and grimy death metal. That being said I still enjoyed this record and it was a pleasant surprise as I was expecting a typical Polish black/death band, and Atonement is certainly not typical, and that is worth praising.