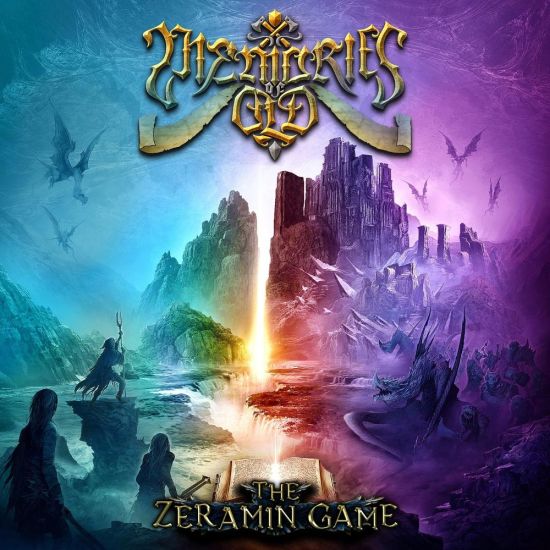 I remember checking Memories Of Old out in the early February of 2020 when I was rather new to both metal and power metal. At that time, I had just got into Reinxeed and I thought of trying some of Tommy's other works. Back then, only the singles were out, and I didn't think much of it. Then this dropped and blew my mind with its sheer power and epicness. I'm constantly going back to The Zeramin Game all these times and honestly by this point, this release has reached perfection on my scale.

Straight to the content. As usual, we start with a narrative intro introducing the background of the album. In this case, our story is set in a cursed land without history named Xia. And then Overture would give you an idea of the whole musical progression of the album. Already the epicness was overflowing, then the grand anthem The Land of Xia stirred up the adventurous mood almost immediately with its pounding rhythm and soaring chorus. Zera's Shadow will sweep you on with its epic, bombastic orchestra. The flowing solo and infectious chorus really sums up what I do enjoy about the symphonic side of power metal. Certainly fans of Rhapsody will not find this boring. And with the first two songs we’ll be familiar with the setting of legend - we know the ailment of the land of Xia and we know it lies under the shadow of the island of Zera.

Now the focus zooms in on our young protagonist Vi and his companion Ty as Some Day Soon expresses their frustration at proving themselves. This track is definitely delivered with some of Sabaton's riffing energy and the chorus is not without a hymnal quality. Of course, no power metal album is complete without a ballad or two, and Destiny is the ultimate power ballad with its swinging rhythm and Tommy delivering some emotional verses. What's more, it definitely made the next track Across the Sea sound more glorious in contrast to the former's melancholic beauty. And the banging riffage on Arrival pushed things to a semi climax for me with its obvious Crystal Empire influence. I especially enjoyed the last part where the guitar and orchestra weaved a fully epic melody. By this point, the story has also come to a semi climax as the young adventurers arrived on the shores of Zera and took their first perilous steps in the Zeramin Game.

Then the storytelling turns to Fowlen, "until now, a man with an untold story of his own" and the would-be protégé of Vi and Ty. Fowlen's Revenge tells briefly of his grief with Zera and his pursuit for the brave young warriors; I suggest a trip to the band’s official website to get to know the whole story. With its keyboard flashing along the guitar in an extremely Freedom Call way and its fast pace, this is definitely one of my favorite tracks on the album. I especially enjoy the little twist in the solo around 5:00 - you'll have to hear it to appreciate it.

At last,we come to the title track, the 14-min epic The Zeramin Game. One might think that a 14-min epic after an album of songs with approximate length of 6 minutes may be too ambitious, but no, this is an absolutely captivating track with its own twists and turns, highs and lows.There are straightforward heavy rocking parts and there are some passages that overdosed on the epicness. As the narrator chants to the rhythm and the tension builds up at around 8:00, the final climax is brought off by a flashy solo. This will definitely raise some goosebumps. What's more, the final reference to The Land of Xia completed the sense of symmetry that I'd always appreciate in concept albums. And the happy Finale will send you on your way with a brilliant mood.

What I consider as one of this album's greatest virtues is probably its pristine production. I remember comparing this one to A Christmas Carol back in 2020 since Tommy was on both of them. And I was struck by how flat and Disney-like the former was while this one's instrumental arrangements and compositing is simply ... perfect. There is an obvious bassline and the drums are the literal backbone of the album. The guitar sound is not drowned out by the orchestra. There are some pretty beefy riffs in songs like Fowlen’s Revenge and Billy pushed out some really slick solos. My favorite thing is how precisely the orchestra adds to the epicness - there are quite a few parts where the thrill just ran down my spine. Then again the upbeat melodies and the generally galloping rhythm are all absolutely satisfying for such an old school power metal fangirl like me. And of course Tommy handled this one magnificently. His range and tone is the perfect fit for this sort of glorious symphonic power metal. The soaring choruses, the heavier verses and the epic choirs were all delivered straight onto my musical G-spot.

I've been thinking about penning this review for some time now, but I've never really got around to doing it until this week. Not that this is an overtly complicated album. Indeed, if you break it down to its core, you'll know it to be not much more than a regular power metal concept album. Yet, basic as it is, everything just falls together so naturally and effortlessly that I can find no dull point. Billy is such a genius composer and lyricist that he has made the generic tale of a young warrior seeking glory really works this time - I started to sympathize with Vi as Tommy sings “Till now I’ve lived a life of mediocrity”; when the guitars rings out to the narrator chanting ominously, my heart clutched for the fate of the young warriors. Even the more Disney-like passages are fun and there’s no cringe moment where the excess of orchestra makes me nauseous. I sure enjoyed this release immensely back in 2020, and I still love it to this day. If symphonic power metal should have a definition, then this would serve. And for a debut, this is most certainly a masterpiece that will stand the test of time.