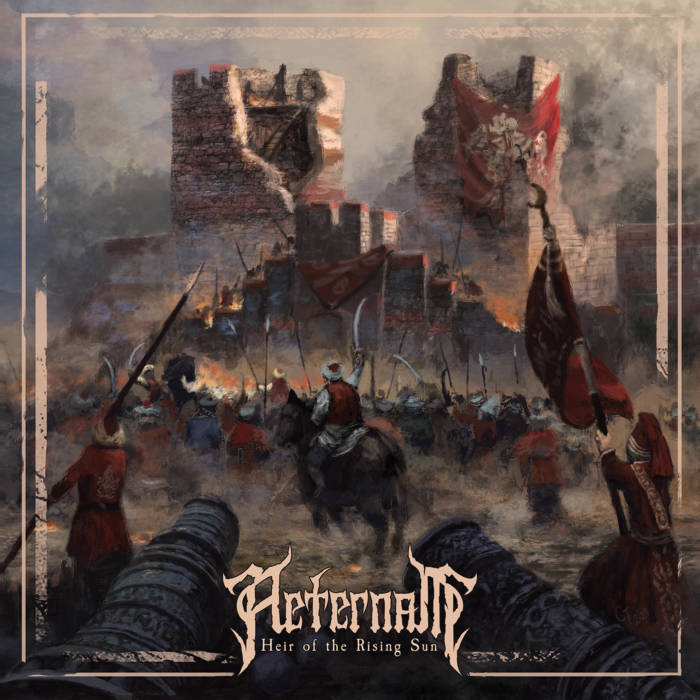 Aeternam is a band from Quebec City with a rather unique style, even if it is often compared to many other bands. Behemoth is one of those bands that immediately comes to mind because of their similarity in the predominant use of the Phrygian scale, resulting in a sound that can be described as exotic, tense and sinister. Like Orphaned Land and Melesh, Aeternam uses not only the tonality associated with the arabesque sound, but also instruments originating from the Middle East. Finally, it would be impossible to describe the music of the Quebec band without mentioning their symphonic approach that relies on a huge soundscape, reminiscent of Wintersun and Septicflesh.

Throughout their discography, Aeternam has managed to work in various sounds. Indeed, the first two albums of the Quebec band Disciples Of The Unseen and Moongod, certainly used a structure that could remind of melodic death metal. With the release of the album Ruins Of The Empire, the symphonic aspect was rather put forward. This emphasis on the vastness of the soundscape reached its peak with the release of the album Al Quassam in 2020, which reached the list of the best metal albums of the year according to several magazines and metal fans. The strength of this album released in 2020 was for many attributed to the balance the band showed between harmony (their melodic leanings) and power (their death/black metal leanings).

With their 2022 album, Aeternam kept this balance while adopting a more narrative vision with Heir Of The Rising Sun. This last album tells the story of the fall of the Eastern Roman Empire, more specifically the conquest of Constantinople by the Ottomans in 1453. Although the Arabian melodies are as familiar as ever, Aeternam's approach is more folkloric. Indeed, the increased use of sung type vocals reminds of rather popular works in the power metal style. This can indeed be observed in some compositions such as 'Irene' or the melodies present in 'Nova Roma'. Melodic death metal is still a foundation for the Quebec band, which can indeed be seen on songs such as 'Beneath The Nightfall' and 'Where The River Bends'. One can recognize melodies and especially symphonic arrangements similar to Finnish bands like Brymir, Frostide or Whispered. The presence of folkloric pieces such as the opening piece 'Osman's Dream' or the interlude 'Kasifi's Verses' and 'Akhatist Hymn' which both allows the listener to catch his breath while plunging them in the middle of the 15th century in the Byzantine empire.

Aeternam ends their fifth album in grand fashion with the siege and subsequent fall of the capital of the Eastern Roman Empire. This is the first composition the band has performed that exceeds 10 minutes. This last piece, divided in four sections, shows once again the balance that this Quebec band executes between rather powerful passages and others rather melodic. With this fifth album, Aeternam has perfected their black/death metal folk flavor and increased their balance between power and melody.