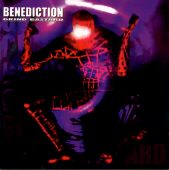 Many societies have three sections: the upper class, the middle class and, of course, the lower class. The metal cosmos translates this structure in three types of bands. The famous ones (Metallica, Iron Maiden = upper class), the ones that will never have even the smallest type of success (roughly 80.000 underground bands plus, in a fairer world, Sabaton = lower class) and the (often semi-professional) bands between those poles (= middle class). And just like in a greater society, it's the middle class of metal that keeps the machine running. Its representatives keep a certain distance to overly commercial thoughts, but they also see no sense in recording the most rumbling underground demo in the history of metal while screaming "we are the trve cvlt".

Benediction is among these socially desirable bands. Grind Bastard is definitely no commercial work, although it does not have much in common with absurdly low-tuned guitars. The veterans mix death metal with thrash and a punk-compatible attitude shines through their pieces as well. I admit that the playtime of more than an hour would be enough for three punk "full-lengths", nevertheless, Benediction's composition depicts a raw and mangy approach. Anyway, it goes without saying that the technical skills of experienced combatants such as Frank Healy add this degree of virtuosity which separates metal from punk. As a consequence, the individual tracks are not as straight as usual punk or crust core pieces; exceptions like the strong and direct "We the Freed" prove the rule. But many tracks score with their astonishingly good flow. "Agonised" is the first track that has to be mentioned in this respect, but it is beaten by "Magnificat", an outstanding highlight.

The song starts with a slightly rebellious bass line, the drums set in with a simple beat and the guitars complete the picture with very smooth but simultaneously really aggressive leads. The center of the song slows down the tempo and, of course, Frank Healy also introduces this less rapid part. But I also have to mention Dave Ingram. He roars vigorously and despite a relatively monotonous performance, his deep voice does not lack charisma. His contribution adds value to the fast parts (the songs reaccelerates at the end) and to the slow sequence as well. Especially the line "yet they lead us to the slaughter like they lead a horse to water" expresses an overdose of contempt and hatred.

Nevertheless, it is the brilliant drive of many songs that makes the album to something special. "I" - no Kiss cover version, although Gene would have been happy to get some easily earned royalties - presents the five-piece like a machine whose cogs mesh in the most precise manner. The dudes celebrate more than seven minutes a cocktail of straight velocity, extremely heavy mid-tempo and solo guitars that add an almost dreamful-melancholic mood. But generally speaking, Benediction create a very sinister atmosphere, the vocals as well as the guitar sound. By the way, the production does not suffer from any major flaws. Seems as if the veterans had a clear vision how the finished album should sound.

Although Benediction do not offer a Kiss song, they continue their tradition of cover version. Grind Bastard holds three foreign tracks. Usually I accept only one, but the self-composed material surpasses the 50 minutes mark, so what. The best track of the trio is Twisted Sister's "Destroyer", a real monster in view of its brutal heaviness. It sounds like the descendant of "Forged in Fire", the ultra-violent Anvil cover that enriched Dark Is the Season. "Destroyer" is so uncompromising that I am not at risk to see Dee Snider in my mind's eye. Honestly speaking, I miss neither him nor his lipstick. Less exciting are the further cover versions - without these pretty slack interpretations, Grind Bastard would have been a candidate for a 90 plus X percent evaluation. Anyway, the original bands behind "Electric Eye" and "We Are the League" illustrate the wide range of influences of the band - a band that has written a very strong album, because even its "second row highlights", for example the title track, "Carcinoma Angel" or "The Bodiless" are coherently conceptualized, robust and powerful. The Grind Bastard rules with an iron hand. No doubt, it is this kind of album that keeps the machine running - and we did not have many of them back in 1998.