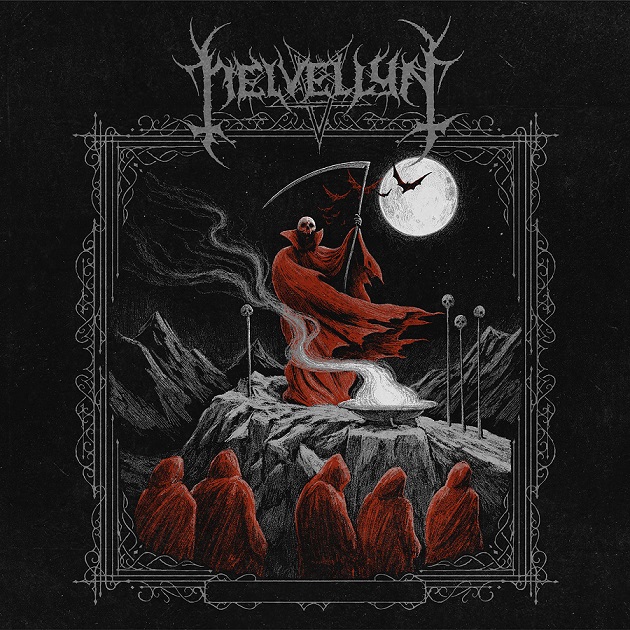 When some robotic, mechanised black metal pours out of the speakers and a malevolent gnome spreads sinister wisdom (or what he thinks is), there's a good chance it's a British band, released by Purity Through Fire. Frosten, Nefarious Dusk, Úlfarr… yes, it is true that the Norwegians were the first that made their national scene to a big playground of incest, but now the Empire strikes back. No sex please, I’m British – this was yesterday! Here comes the next murderous legion called Helvellyn. And I admit: it’s fun to make some stupid jokes about these bands who sound pretty similar, but they also deliver reliably good music. The Lore Of The Cloaked Assembly marks no exception.

Okay, the intro seems to be stolen from the archives of the clown who puts himself to shame by calling himself Rock'n Rolf. But Running Wild disappear pretty soon. Viscous guitar lines get the upper hand and the lead singer doesn’t sing, but he screams, nags and cries in order to underline the dark vibes of the music. Due to the not very organic production, the album almost delivers an industrial undertone, but that’s not bad at all. It may be surprising, but it fits the approach of the five-piece.

Equipped with an adequate, pretty good artwork, The Lore Of The Cloaked Assembly puts the focus on homogeneity. All of its eight songs came from the same, stinking womb. They do not significantly differ from each other, neither in terms of style, nor with regard to their quality level. Hellvelyn have enough talent to keep their kind of song-writing interesting and fresh. 'Never Ending Moonlit Spires', the longest track, scores with its stirring guitar work right from the beginning while sending some greetings to (old) Mayhem or lesser known bands like Germany’s Eternity. This is just one example – it goes without saying that I could mention more songs here. Nevertheless, I appreciate the fact very much that here exactly the longest track is no lukewarm composition or even a total flop. Why? Well, the album clocks in at 38 minutes. This is no opulent playtime, but gross equals net here and so I see no reason to moan concerning quality.

The constant lava flow of the guitars creates an opaque atmosphere. Doing without surprising twists and turns is part of the concept and Helvellyn are obviously not interested in making compromises. One can say they walk at the border to monotony, but the authentic misanthropy and the unbreakable density of their material makes up for this. And by the way, this band is not the first enemy of innovation and it will not be the last. Just like true evil itself, black metal has already a lot of different faces and forms and there is no need to add a further one. It makes much more sense to pen an output that shows the glorious shape of the unspoiled subgenre. This is what Hellvelyn have done here and they did it in a very competent manner. The rampant closer takes the listener on the final 'Unholy Voyage' with its whiplashing drums, the icy guitars and the insane screams and as soon as its last tones have faded, every supporter of generic black metal will be satisfied.