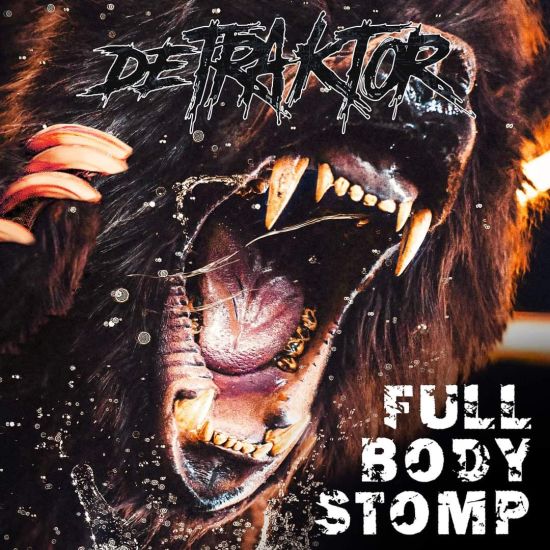 The harbour of Hamburg is also called “the door to the world”. Only for the current German chancellor, it is no place that provides new perspectives, but a kind of gift for the most senior Chinese communist. Given this fact, it’s good to see the promo picture of Detraktor. The three dudes stand in front of the port cranes and do not look friendly. So far and no further, this seems to be their message to dubious politicians. Thus, it is no wonder that their music also does not intend to spread inviting vibes.

However, Hamburg not only has a harbour, but also a zoo. Therefore it is no surprise that the album starts with a 'Gorilla' and a 'Bear Fight'. Already these songs destroy any illusion – Detraktor did not jump into your living room just to have a comfortable seat on your couch. Their voluminous sound and their brutal material want to break your neck. Additionally, the ultra-raw voice pulls on the nerves (naturally in a positive way). But we are not made of sugar either and so we put our ears to the wind and defy the massacre. Maybe the band confuses Hamburg with Brooklyn. This could be the reason why they sound like a harsher version of Biohazard. Indeed, they do not stand in the tradition of the typical Bay Area sounds, it’s a more modern approach. Okay, Biohazard were modern 30 years ago… guess I need another example. Maybe you are familiar with the violence of Dew-Scented. The apocalyptic chorus of 'Gorilla' reminds me of this horde. (By the way, I enjoy the monkey-like “uh” screams – not to be confused with Tom Warrior’s “ugh”.)

High velocity is not the most important feature here. Detraktor also like to dish up grinding, dragging riffs. But from my point of view, the guys reach their best form in the moments whenever they let the blood run free. The dynamic and fierce 'Behave' holds some really great parts, only its solo does not fully convince. Honestly speaking, I miss further songs of this kind. But Detraktor have an affinity for pretty groovy sounds and it is no coincidence that the word “stomp” appears in the album’s name. That’s also okay, don’t get me wrong, because they present it with the maximum of destructive passion. 'Perro', for instance, offers a fine combination of these two elements. More or less modern Sepultura shimmers through the notes of this track. As said before, that’s a cool thing – perhaps it’s just my personal old-school taste that forces me to lament. Forgive me, but I only feel good if I have a reason to feel slightly bad as well! From this follows that it’s a good thing that 'Seven' is much too long (precisely seven minutes, surprise!). It sounds like its own live version with a lot of space for instrumental excursions.

Full Body Stomp stands for some expressive riffs, a massive production, a tightly playing combo and a massive portion of anger, but it also houses some parts that do not give me much. The hardcore vibes should play a less prominent role and I recognize a slow but steady loss of quality as the album progresses. Nevertheless, this work surely makes a statement in its niche. Xi Jinping, beware!