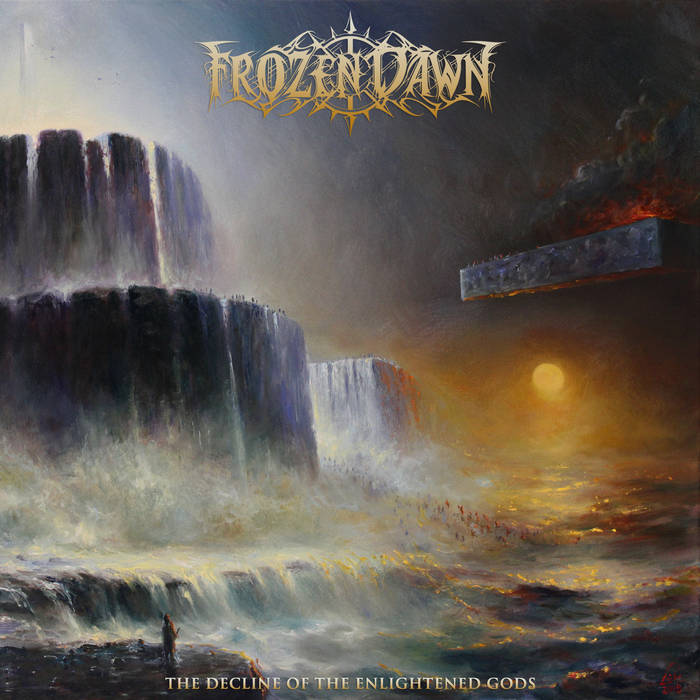 The new Frozen Dawn album The Decline Of The Enlightened Gods which will be released via Transcending Obscurity Records is something I just stumbled upon because I really love the paintings of Mariusz Lewandowski (who unfortunately died this year). So this is how the band got my attention but they really deserve it for a different reason. With their fourth full-length (although its predecessor was a pure cover album with songs from 1st and 2nd wave of black metal bands) the Spaniards go straight into the same melodic death/black metal direction as mighty Necrophobic. And to anticipate a little bit - this album is going to be the first big highlight of the releases in 2023.

Started as a more technical death metal band (and so they did on their debut The Old Prophecy Of Winterland) the course became pretty clear with their second output released in 2014 (Those Of The Cursed Light). I wouldn't call them a Necrophobic rip-off because the arrangements have slightly more melodic parts and there's some more black metal elements in their music just as Dissection or early Sacramentum did back then. Starting with 'Mystic Fires Of Dark Allegiance' the band shows their technical skills right from the beginning. The atmosphere is very cold and the tension during the track is kept high all the time because of its many twists and turns and the surprising melodic arcs they built in the song. But they can do pretty different things, too. The fast tracks are pretty brutal and the riffing in those (such as in 'Black Reign Awaits') might have been on the last Necrophobic albums, too. 'Frozen Dawn' is one of the more hymnal songs with some galloping drums and very catchy riffs. The song isn't that tricky like the others - it is kept quite simple and just a frosty stomper which makes it fun listen to. 'The Decline Of The Enlightened Gods' is a very atmospheric and creeping track until 1:30 and I have to say that the break there is pretty awesome. I wished they had kept up this tempo and the style there because in its further progress the song becomes pretty technical. Not bad but they could have made a real killer song out of this. But this is complaining on a very high level. The regular album closes with a very calm acoustic guitar track called 'The Fall Of Aeons' which is the only song on the album that lets you maybe guess the Mediterranean origin of the band because of the way the guitar is played. But before The Decline Of The Enlightened Gods ends the guys have an icy topping for the listener. 'Blinded By Light, Enlightened By Darkness' (a cover version of guess who? Of course Necrophobic from their fantastic “Hrimthursum” album) which is kept quite close to the original blasts you with some blizzard-like riffs into your freezer.

I can simply recommend this album to everybody who likes the aforementioned bands (and if you don't know them, nobody can help you anymore). You can find real perfection here, passion for the music, a great atmosphere (at least I do have the feeling right now with some frozen landscape around me these days) and some really great melodies and ideas. Check the album – you will like it for sure!!! Only one question is remaining – this is now the second Spanish band in a short time I listened to who play this cold Nordic style of metal – do they all like their warm climate down in Spain or would they rather prefer to shovel away snow and scratch their car windows??