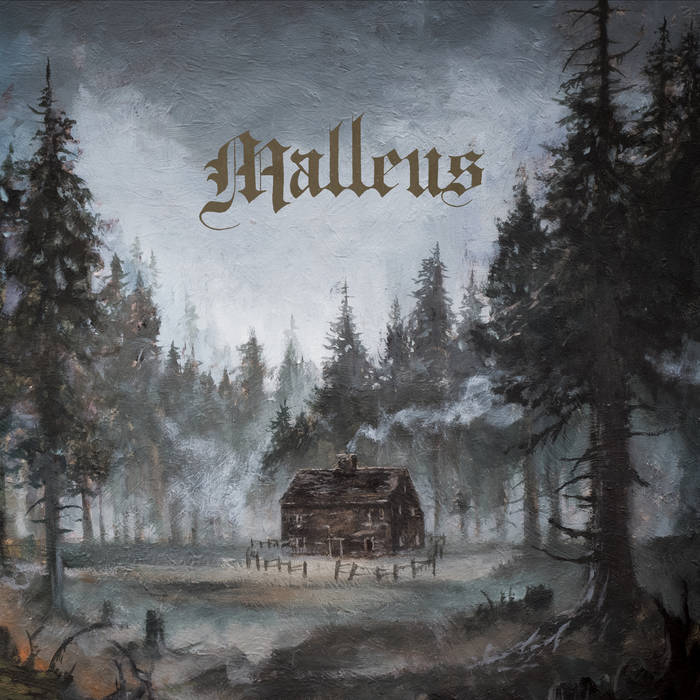 It is much too warm for the season while I write this review. Maybe this is due to the The Fires Of Heaven, whose hot temperature has enough power to heat up our planet as well? Honestly, I don’t think so. But the album has other qualities. Don’t be fooled by its surprisingly romantic artwork. It seems to be a reminiscence to the lyrical concept, which is about the arrival of Europeans in New England during the early 17th century. Something new this time, no Nazis, no Satan, no zombies here – and that’s good.

Well, the music itself fails to deliver something similarly original. The first song after the non-metallic intro bursts out of the speakers, immense and radical – and it sounds like very young Quorthon (R.I.P.) on an industrial trip. That’s the guilt of the strict simplicity and the distorted, inhuman voice. In Finland, the guys of Impaled Nazarene light a candle: these American guys play our style better than we do.

But Malleus do not only walk in the shoes of other bands, they try to find their own style. Their black metal does not sweat the atmosphere from every pore. They prefer to add a very mangy touch to the songs. Some sections almost convey a punk feeling. I cannot say that I can reconcile this style with the artwork. But I can be impressed by the infernal depth a song like 'The Prophetess' creates. Spiritual chasms open up. Unfortunately, the band cannot maintain the density of this and a few other tracks during the entire distance. Some mid-tempo parts deliver solid metal entertainment, but they do not make my pulse run faster. Aggravating this situation, a small number of riffs sounds pretty well-known.

While the seemingly poisoned lead vocalist tries to scorch his surroundings with his throat (Nattefrost’s first solo work comes to my mind), his comrades play their crude mix of extreme metal. 'Awakening' is the strangest title with its scarily howling “Reign In Blood” compatible guitars. The entire track looks like an overlong intro, not bad, but much too opulently designed. Four minutes instead of eight would have served the purpose as well. At the end, the song gains intensity because of rasping guitars we heard the first time on “Blood Fire Death” (the title track). Well, as already indicated, some new releases do not only deliver brand new material…

Anyway, I don’t want to be too harsh. This debut is not flawless, but it presents some very fine moments as well. The closer marks the final highlight in view of its excellent arrangement, the very expressive guitar work and its rare atmospheric components. Therefore I can recommend this album which is properly produced. The mix has more than the necessary degree of directness, it does not lack filth, but its dirt is not at the expense of vehemence or sharpness. All in all, it’s a good and pretty varied debut, but maybe you like to listen for yourself…?