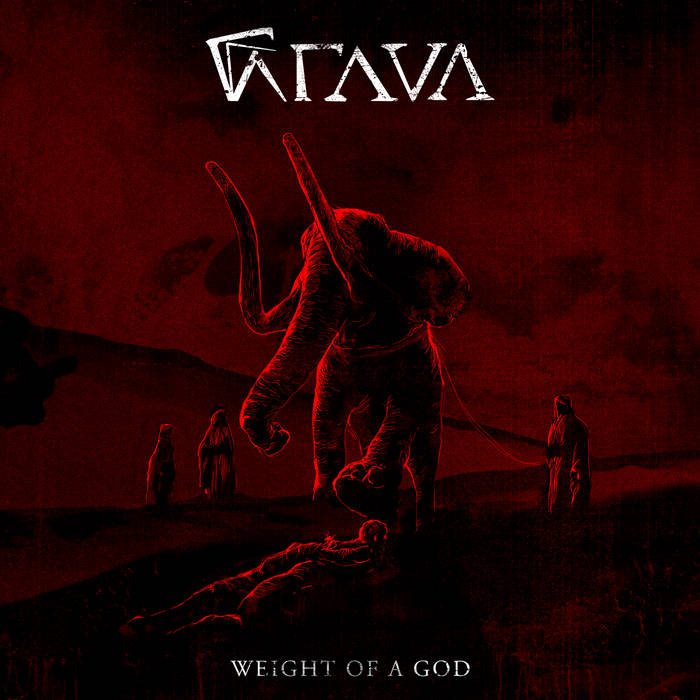 "Scenes of Death seen through the eyes of the dying" is the summary given for Grava's debut full-length and quite a fitting one it is. A recollection of anguish, despair and stories of victims of varied disasters and circumstances. Death can be crushing and bleak and thus, The Weight Of A God embodies everything these two words could conjure.

Wasting no time in presenting itself, 'Waves' opens up this monolith of hopelessness, which from then continues to progressively grow mightier and heavier as it goes on. Musically, the album maintains a constant pace, with crushing riffs supported by pulverizing bass and drum while the vocals are a mixture of angry grunts and despaired screams. One aspect that I find cool about this record as a whole is that it doesn't wear out its welcome. Tracks have a length of around 3-4 minutes, even though they feel longer than that. With this, the band managed to craft a well-condensed offering of pure crushing dread without dragging itself too much. Despite the lengths of the songs, the closing track 'The Pyre' lasts a bit over 8 minutes, with a somewhat eerie ambient that go in crescendo until being deafening that ends with a brief respite of silence, allowing the album to seamlessly start all over again.

Production-wise, everything is perfectly audible (just listen to that bass!) while keeping some raw, slightly unpolished sound as a whole. For an album recorded live in the studio in just three days, it is evident that the band went into the studio well-rehearsed and the final product speaks volumes of that, even more for being their debut. In just around 30 minutes, Grava has made an excellent debut that deserves all the attention possible. Imagine Abyssal's bleakest riffs played at the pace of Ahab's first LP; that's the best way I can describe this band. Weight of A God is a dreadful march of crushing death, and I can only hope that the band's future brings out even more destructive music. My favorite moment of this album has to be 'Bender', with my favorite riff of them all. If you like your sludge metal really low-tuned and heavy, supported by desperate vocals that plead and growl, then allow Weight Of A God to obliterate you.