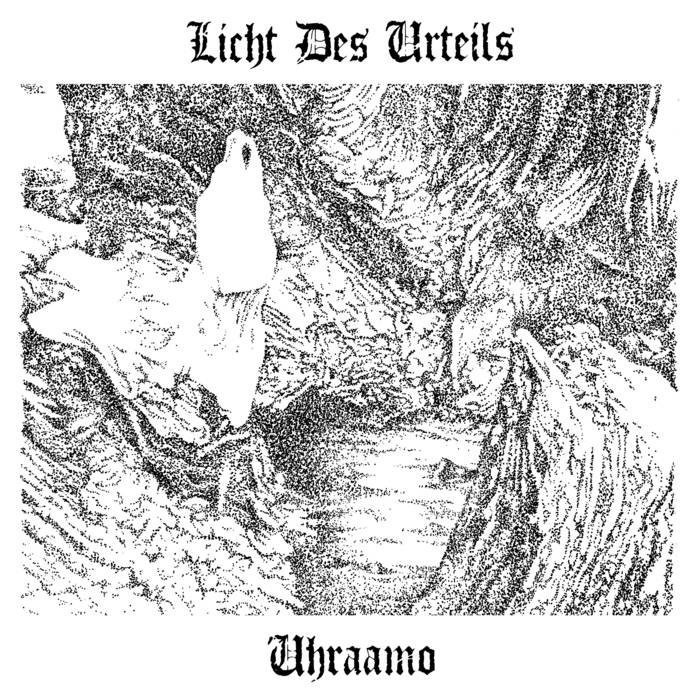 Licht Des Urteils? Pardon? What kind of light is this? I don’t know. But I can tell you that the guys who run this band have released a fine debut album. Surely, there is no shortage of black metal outputs from Suomi. But there are also more and more people and yet no one stops f**king. And God in all his goodness loves every new child, right? Therefore it is only logical that we should lend an ear to every new black metal outburst from the crazy Finns. So this is what I do.

Uhraamo ("Place Of Sacrifice") does not demand many sacrifices from me. Instead, I enjoy this album. It is not perfect – the somewhat noisy and pretty non-organic sound is something I had to get used to. Furthermore, I would like to know what the dubious and inadequate sound experiments at the beginning of 'Baptised In Unholy Water' are trying to tell me. Even worse, the entire number lacks intensity and penetrative power.

Anyway, there can be no doubt that the positive aspects dominate here. The rampant frenzy of 'Kuollut' shapes a real jewel. The main riff crosses Burzum and Thy Primordial, but that’s not all. The musicians add a big portion of apocalyptic energy with the effect that within a radius of 100 kilometres in all places of worship the pastor is blown from the pulpit. Well, he’ll survive, I suppose. Apart from their insane destructiveness, Licht Des Urteils also cultivate the art of sulphurous riffing. It occurs in the middle of the exciting title track as well as at the close-to-death-metal-beginning of 'World Eater' (no Bolt Thrower cover). By the way, the title track also houses an almost considerate, mild part, but this is only a short section and it remains an exception. So no need to panic. All in all, I appreciate that really heavy riffs show up from time to time. They do not falsify the furious black metal character of the album, but they appear like a link to the traditional roots of metallic sounds.

The vocals are typical of the genre. The comrade at the microphone enjoys vomiting out sounds that my father would have called repulsive. I, on the other hand, am delighted. This allows me to ignore that atmosphere does not play an important role on Uhraamo. I enjoy other details instead. Do you want an example? Well, in the hyper-speed sections, the audacious guitar lines create staggering moments. I also like to experience that the full-length does not reveal a slow but steady loss of quality. The closer 'Ritual Of Six' is ferocious, relentless and simply great. It does not leave much room for improvement, only the lyrics could have been even more exciting if the song had been called “Ritual of Sex”. The restlessly f**king part of mankind might agree. Either way, cool album. Fans of typical Finnish black metal cannot go wrong.