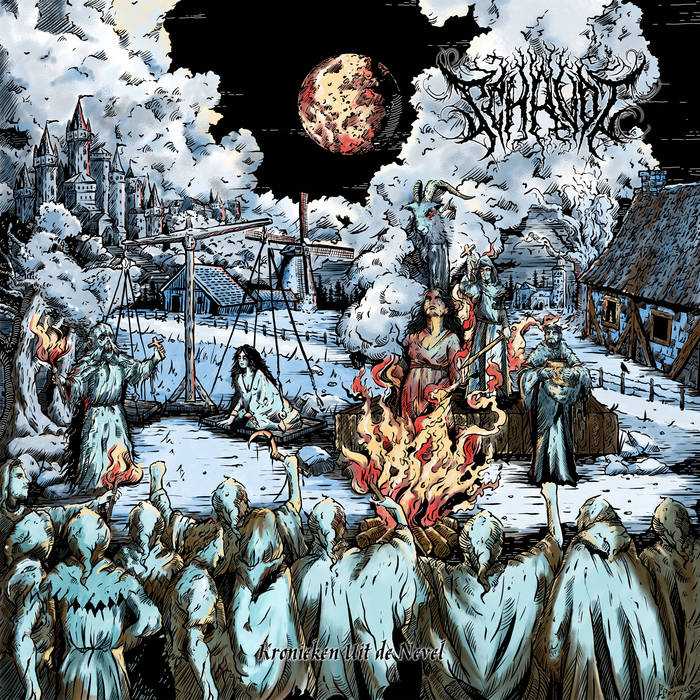 Well, this might be a fictional judgment but quite similar to what witch trials might have been a few centuries ago. What does this have to do with Schavots second album Kronieken Uit De Nevel? Quite a lot because the lyrical topics deal with this and other Dutch folk tales like “The Flying Dutchman” or “Witte Wieven”. So again we will get to know some stories here that are (as the smart reader can see instantly) written in Dutch. I guess I have often enough told my opinion about the Dutch language and its predestination for hateful black metal so I won't repeat myself here.

So what about the music? Pretty Ulveresque were my first thoughts after a few seconds. A gentle female voice sings some soft tunes and the guitar melodies sound pretty much like Ulver did on “Bergtatt”. But this is just using some witchcraft to make you enter the foggy surroundings of the Dutch tales. Soon you'll find some pretty harsh but still melodic 2nd wave of black metal that sounds pretty much like the Scandinavian heroes Ulver, Satyricon, Enslaved and all these bands that were pioneering in those days (so there isn't too much new here in comparison to the first album Galgenbrok). So one may ask what is new here? Well, mastermind Floris has laid his focus on more melodies here and there and also the vocals aren't that one-dimensional as on the debut. Sometimes the vocals are double-layered and you can find some demonic grunts like the Brits from Bal-Sagoth did. In some parts the music is also more frantic and faster than on Galgenbrok and keyboards play a major role (like in 'Heksenwaan'). In 'Niet Alleen De Avond Walt' use of some dissonant structures leaves the listener in certainly uncomfortable und restless mood. I guess that Schavot left the comfort zone with songs like this a lot to open up some new grounds. The same goes for 'De Laatste Dans Gedanst' which starts with some very calm acoustic parts. This is very unusual for Schavot but matches perfectly to the title. But don't be afraid – the song turns out into a pretty fast tremolo picking inferno that won't be played in any traditional ballrooms worldwide.

Compared to its predecessor, (production-wise) Kronieken Uit De Nevel is on the same level which means that all is fine with the sound. Musically it has to grow (and it does with every listen) and needs a little bit more time to fully lighten up the initial spark. But if you take the time and you'll let yourself be affected by the album, you will like it for sure! Oh, by the way you have to take a look at the cover – you will find there some pretty cool little details that show how much in love with detail Floris is with this project.