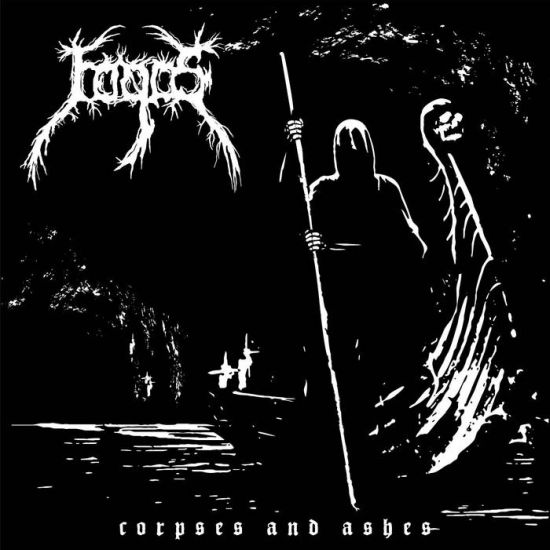 "This is very old-school Scandinavian black metal" were my first thoughts on the debut album Corpses And Ashes by Fogos. The only problem is that the quartet doesn't hail from Northern Europe but from Spain.

Kicking off with 'Acheron' the guys who also play(ed) in bands like Blazemth or Obsidian Kingdom perform some really frosty tunes in the style that Gehenna or Ragnarök and co did in the mid-90s. The tremolo picking is quite traditional and the melodies arcs are pretty clear to comprehend. Here and there some more punky riffs appear out of nowhere (just like French Ad Hominem did a lot) but the orthodox black metal aspect is clearly the main focus in Fogos. Most of the time the tempo is kept quite high but the 10 tracks appear to be quite catchy nonetheless. 'Dysnomia' is a very good example of this. A lot of raging fury is paired with some really harmonic yet simple song structures so that the track turns out to be a really cool banger. 'Mortis' creates a very oppressive and dark atmosphere though because the melodies are partly a little bit slower and the instruments are tuned down. The desperate shouts underline this quite depressive atmosphere. Another track which is (at least in my ears) some really great black metal is 'Exis'. Again it is quite simple in its structures but catchy as hell and much better than a lot of the stuff that the aforementioned bands released during their last 10 to 20 years. But the other seven tracks are also very interesting – not innovative or ground-breaking – but some really solid and well-performed black metal that won't disappoint if your heart's still beating in the 90s.

If you take a look at the very simple-kept cover you can clearly recognize that the album has something to do with Charon and Greek mythology. And here we go – the band says about it that “it is a one-way trip down the Styx river, full of dark, raw and direct black metal reminiscent of the 90s scene but with an updated sound allowing one to appreciate the nuances and essence more clearly”. Well, I guess there isn't too much to add.

Corpses And Ashes is a cool black metal gem which was recorded by Javi Félez at Moontower Studios (also responsible for Teitanblood or Spanish Graveyard) and mixed by Dan Lowndes at Resonance Sound Studio (Cruciamentum, Mortiferum, Corpsessed, Craven Idol, Craven Idol…) that I can clearly recommend to every black metal maniac who doesn't need any dissonances or sound experiments in his stereo.

Rating: 9 out of 10 Stygian depths