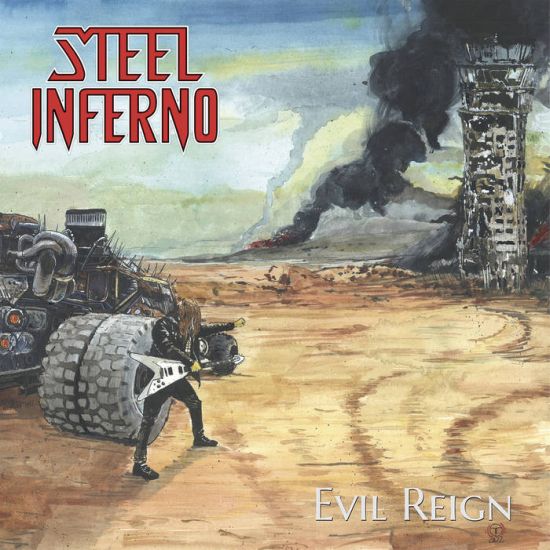 I was seeking on Amazon for Steel Inferno’s Evil Reign CD. The first suggestion on my screen was a book called “Steel Inferno: I SS Panzer Corps in Normandy”. Well, interesting, but not my topic today. I rather prefer to lose some words about the third album of the multi-national five-piece that hails from Denmark.

The big problem on their last full-length were the vocals. I still do not know what happened to them and, additionally, now I also do not know what has happened to Karen herself, their former singer. Whatever, she has been replaced by a male colleague and this is always a somewhat courageous move of a band, because a characteristic element is exchanged. Karen performed fantastically on the debut, but the new guy (Chris) also knows how to raise the alarm. He follows a traditional approach and uses his normal, clean yet vigorous voice. When he sings “I don’t want to day” in the opener, there is a little bit of Bruce Dickinson in the air. Additionally, he sounds like this wannabe-alien from Agent Steel. That’s not bad, Chris gives the music some percentages that were missing on the last album.

M-A says the band plays heavy metal, but do not think of consensus formations like Sweden’s Wolf or, well, Iron Maiden. Steel Inferno are raw and easily inflammable. There is plenty of power, speed and thrash metal in this album as well. If you ask me (but usually nobody ever does), the label heavy metal is misleading. Okay, the guys themselves speak of “fast and furious heavy metal” on their facebook site. So maybe I am just a poser who thinks that everything which sounds harsher than Ratt has to be thrash or even death metal. I do not know. Either way, we get some razor-sharp riffs here, the drummer enjoys fast rhythms and the solos do not care about melodies. Moreover, even the stomping, pretty old school headbangers that could be a leftover from Omen or Damien Thorne, for example 'Queen', convince with their profound heaviness. No doubt, the songs also profit from the production. There are surely better defined, more transparent results to find in our scene, but the massive guitars and the pretty dark atmosphere make up for this.

Highlights one should not miss are the somewhat menacing 'Jaws Of Evil' (by the way, impressive chorus with dark background vocals), the full speed ahead eruption 'First Strike' or 'Caught by Her Web', a song that houses extremely fantastic riffs and leads. However, the best thing are not the highlights themselves. Here the best factor is that the remaining tracks also reach a very good level, pretty close to the quality tier where the highlights dwell. Just take the dynamic chorus of 'More Than Meets The Eye' it is a pure triple punch in the face. Or enjoy the restless riffing of the opener, the Hallow’s Eve-like 'Breakout' or whatever you want.

Finally, I like the artworks of the Dane’s outputs. They reflect the naivety of the early eighties and given this fact, they almost go hand in hand with the music. Moreover, none of them lacks atmosphere and they lend the band a visual individuality. I can recommend this album very much. The band is back on track – and it delivers definitely more fun than the SS did in the Normandy (to say the least…).