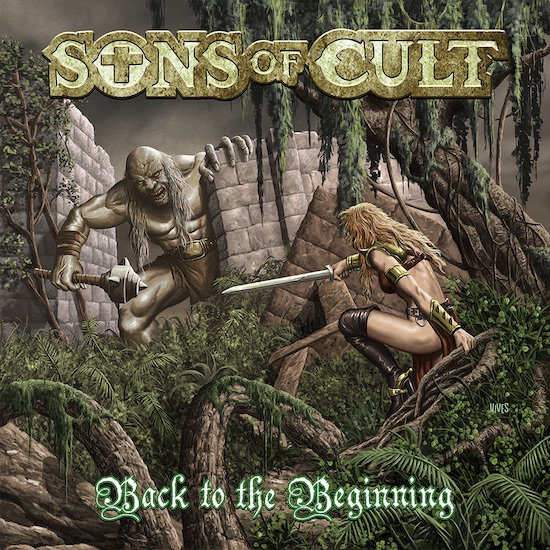 New Wave Of Traditional Heavy Metal is a rich and widely expanded movement with a cult following that keeps the spirit of oldschool heavy metal alive. So far, I haven’t come across any terrible bands that are a part of this wave, many fans like myself often end up praising and supporting these musicians that truly give the best they’ve got. To start things off with 2023, we have a new band on the horizon, Sons Of Cult from Spain. This band was formed in 2020, and released their debut album Back To The Beginning on January 5th 2023, via the label Fighter Records. Let’s take a look at what this new blood in NWOTHM has to offer.

As expected, you’ll come across catchy heavy metal and hard rocking riffs, with plenty of guitar melodies and solos, mid-tempo drumming and clean singing vocals which sound a bit like Ozzy Osbourne. A lot of the songs are very “slow and steady” heavy metal, while the tracks 'Evil Trail' and 'I Wanna Go Out' go a bit faster than the rest before jumping back to a slower tempo, with one exception being the cover of Michael Schenker Group’s “Desert Song” as the eleventh track, which probably sounds the best out of the bunch. There isn’t much more to add to this so I will just have to jump right into my overall impression of this album, which I would summarize as “catchy but lackluster”. The majority of this album feels just like one song that goes on and on for about 40 minutes, all of the songs are very repetitive and done in such similar fashion that you can’t tell the difference, and I’ve seen some people complaining about the same thing. Another issue would be the weak vocals with added reverb, that obviously tried to be emotional like Ozzy Osbourne in his prime days but ended up being very uninspiring and not as powerful. I won’t lie to you, the album’s cover art and the sound production are amazing, but unfortunately, they don’t make this entire thing any better.

I wish that this album offered much more than it did, there are catchy moments here and there but they are nowhere near as powerful or memorable as they should have been. I understand that debut albums are usually “baptism by fire” for many bands, but I really think that they should have taken some more time and worked a bit more on their songwriting to make this a great start for the band that I would definitely recommend. I have a feeling that Back To The Beginning was a rushed album because it totally lacks passion and dedication, so I hope that if Sons Of Cult ever come out with another album, they would improve upon these mistakes which sadly prevent them from being great.