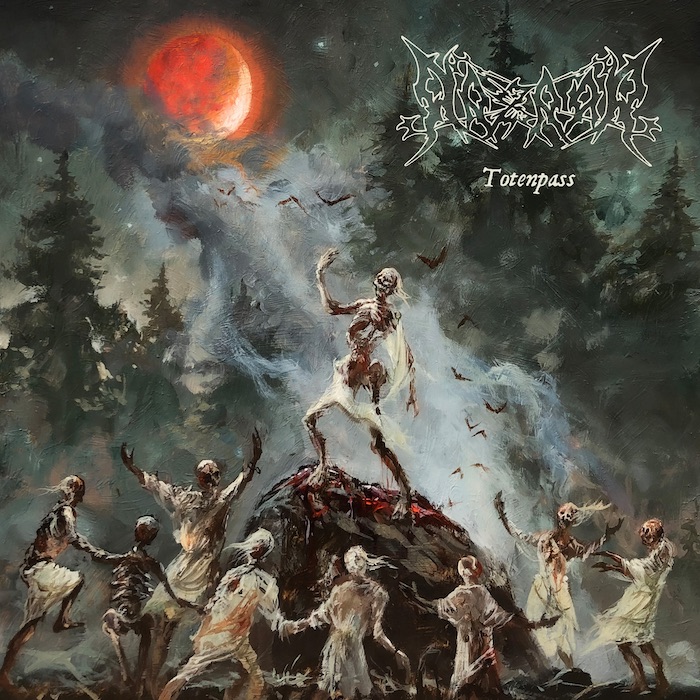 It's been almost two decades since the so called “third wave of black metal” was first started popping out of the US, and continued to be used up until the 2010’s. In hindsight, grouping together bands like Leviathan and Xasthur with Deafheaven or Liturgy feels kinda wrong. That being said, the in-between fringes of bands like those, also spawned many black metal bands that were Avant-Garde and unorthodox, without discarding the grit of the second wave. And so, we have Häxanu, who return with their long-awaited sophomore LP, Totenpass, to be released through Amor Fati Productions.

Häxanu, are one of the many projects of prolific and consistent US black metal virtuoso Alex Poole, aka Esoterica, aka A.P.. His projects pretty much blew up in the underground throughout the 2010’s with some of the most bizarre and compelling black metal, even collaborating with Icelandic artists. Häxanu, is one such project teaming up with vocalist L.C.. Häxanu came out of nowhere in 2020 with Snare Of All Salvation, wherein a style of black metal that blended the epic melodicism of Hellenic black metal, with the cold atmospheres of Norwegian black metal was displayed and that album was universally praised by the underground. Three years later, the project has now delivered Totenpass, and the band is still at the top of their game.

As mentioned above, Häxanu play a style of black metal that balances melody, atmosphere and unrelenting aggression. The overall feeling is an oppressive and all-consuming, and for Totenpass the band maintained it, but have opted for a more aggressive and darker sounding style. The riffs, which continue to be the foundation of the songs for this project, as well as maintaining the complexity and technicality, create melodies that are much more somber and even melancholic, than the epic and sprawling riffs of the debut, but at the same time, the band doesn’t discard the majestic qualities. From the lengthy tracks to the odd signatures, and of course the keyboards enhancing the atmosphere and building momentum, all of it coalesces into a symphony of despotic darkness that’s nonetheless hypnotic, and entices you to keep listening.

A major change and addition to the music is actually the inclusion of acoustic guitars. The album’s intro track ‘Θάρσει’ and penultimate track ‘οὐδεὶς ἀθάνατος’ are instrumental, ambiance and acoustic guitar driven interludes that actually are a complement to the songs they precede, and while they’re small additions, they give the album more variety (to an already very varied and dynamic record) and something of a breathing room in-between the relentless onslaught of pure darkness overall. A.P. truly displays all his talents in all instruments, though the guitar and keyboards continue to be his forte, however, the drumming is also a standout, and is consistent with the previous record, alternating between blast beats, and rhythmic fills. And of course, L.C. as a vocalist is also consistently good, his wailing growls complements both the savagery of the music, but also the sombreness. The overall music has a very melancholic vibe that makes this record sound and feel so dark, and L.C.’s vocals also contribute to that feeling, as he manages to fit both moods with very little changes in tone and performance.

Finally I have to mention the production, as Häxanu is one of those black metal bands that actually benefit from having a clean production, however a noteworthy change from the debut is the fact that’s mixed much more professionally, because for as good and crisp as Snare Of All Salvation was, it was mixed extremely loudly, and that was corrected for this record, and more impressively, none of the grit, or small details and flourishes are lost. In many ways, the project did what all good bands should do with their sophomore record. They took everything that was good about their debut, made it better, improved in lacking areas, and had enough room to mix things up. And, at 45 minutes, this is a surprisingly well paced record, and it's also very evenly balanced, as the album has hard hitting songs, and sprawling epics, and there’s never a feeling of disjointment or as if the longer songs were cobbled together in any way.

Overall, Häxanu has triumphed again, and this is yet another stellar record for Alex Poole’s ever growing catalog of outstanding and innovative black metal. My only real complaint is that the band left me wanting more, and while the record is distinct enough from the debut, the band are still treading the same path they set out for themselves, but that doesn’t mean this path is worth treading. If you enjoy black metal that’s melodic and atmospheric, but also intense and raw, Häxanu is the band for you, and Totenpass is an easy recommendation.