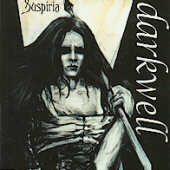 As some of you fine readers may have noticed, there is a quiet revolution occurring in the world of music today. The revolution is made of evolution, hybrid and wild imagination and it is seething from the depths of bands like darkwell.

If anyone out there can tell me how to put a band together and release a masterfully crafted disc one year later on a major label, please let me know, I’ll cut you in on the profits! No kidding, that is exactly what these guys did! Talk about THE musical dream. OK, sorry for the tangent, back to the music…

There’s a great deal to go into about this album. For instance, right in the middle of the album, darkwell treats the listener to an ethereal epic spread over four songs. Another item worth going over would be the title track’s (Suspiria) beautifully blended double-bass drum underlying vocals that could only be descending from the parapet of the most glorious of ancient churches. But let’s get down to the bare bones.

The beautiful and professionally trained siren of the band is Alexandra Pittracher. She’s only 19 and she’s downright astounding… at 19! (Maybe I’m getting old.) Alexandra is, without equivocation, the element that sets the music above darkwell’s peers’. She has tight control and can completely alter an atmosphere in a matter of seconds. Roland Wurzer is the creator and bassist of the band. From what I can tell, Roland is the one who calls the shots here. One of his most rebellious acts against his own musical genre was to free his music of the commonplace male growls. This straying from the beaten path really allows for a more divine sound. And it is that divine sound which will hook you. darkwell is the lighthouse in a sea of gothic gloom.

Bottom Line: If you want to make your neighbors think that the gates of heaven and hell are opening in your living-room, Suspiria is the most convincing argument you can purchase.