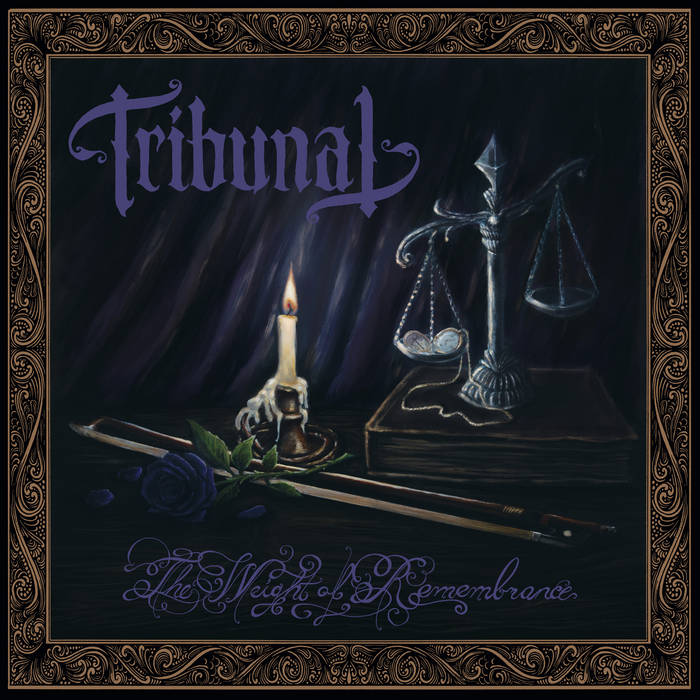 Death-doom, and 20 Buck Spin. Although Tribunal have been unknown to this listener until this very year, the sub-genre tag together with the name of a label with generally cast-iron judgement is a promise of calibre high enough to raises expectations vertiginously, and this Vancouver-based duo absolutely do not disappoint. The listener is cast instantly into an almost ecstatic pit of despondency by an album of lush and viscous gloom, which draws from across the extreme metal spectrum to create an astonishingly fully-formed work of enthralling magnificence. Where some avant-doom practitioners may mislay the metal altogether in the pursuit of frequencies transcendent, Tribunal lean heavily into mournful twin guitar leads, and slow motion chugging, integrating heavily-orchestrated arrangements with deeply sonorous doom, and perfectly balancing atmosphere with aggression. When the just-overwrought-enough clean gothic vocals are added to the mix, as they are on the terrific ‘Of Creeping Moss And Crumbled Stone’, the band easily stand comparison with the best that the sub-genre has produced in recent years, including labelmates Dream Unending, and the outstanding Atramentus.

Despite the inherently lumbering nature of death-doom, and the richly layered sound of Tribunal, the songwriting is impressively tight on The Weight Of Remembrance, the band showing impressive restraint given their obvious technical abilities. It is entirely possible that they may venture into more progressive territories on subsequent records, but for now, the band are smart enough to realise the power of a more direct approach, and as a result their debut never threatens to bore or frustrate. Mourne’s aforementioned cello also provides a point of difference for a band that might otherwise fit a little too snugly into an already well-populated scene. Although strings have been a regular feature of death-doom ever since the Peaceville Three emerged from the north of England armed with the desire to add a gothic romanticism to their leaden noise, rarely has the cello been such a prominent feature of a metal band’s sound, and in hindsight this is curious, given the tonal qualities of an instrument so obviously suited to the genre. For Tribunal, the cello fulfils a similar role to Skepticism’s pipe organ, adding a unique flavour to an already intoxicating brew, as well as anchoring their music in some kind of pre-modern time period, lending their sound an elemental feel that can’t always be achieved by guitars and drums alone. In time-honoured style, the band of course save their most epic for the final track of the album, the twelve minute ‘The Path’ closing proceedings with suitably majestic grace. This towering conclusion serves only to reinforce a growing feeling that Tribunal’s captivating opening gambit is likely to bewitch most who hear it, this year and all the years yet to come.