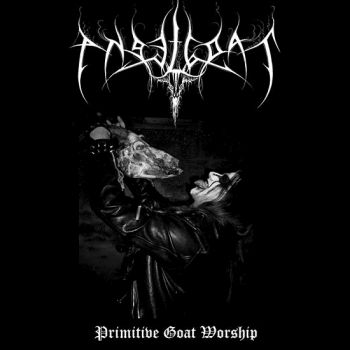 Serbian black metal underground has somewhat been very troubled for many years, due to many older bands not releasing any new material and disappearing with or without a word of goodbye. The other issue is that many of these bands have lived in the shadows of well known and successful names like May Result and The Stone for example, thus have not been as successful in gaining enough attention or support from local or worldwide fans. On the other hand, we have Angelgoat, who is still going strong after 20 years since its formation. Although the band was on hold between 2008 and 2015, Unholy Carnager is here to keep the primitive oldschool energy of goat worship and blasphemy, without ever attempting to sound as polished as possible to reach a wider audience. The topic of today's discussion will be Angelgoat's second full-length album "Primitive Goat Worship", released via Grom Records.

The album title sends a strong message that perfectly describes its sound and atmosphere, it is as primitive and blasphemous as it gets. When it comes to the sound production and musical direction, it's pure 90's black metal with the likes of classic Scandinavian bands, plenty of catchy tremolo and mid tempo riffs to be found on tracks like "Pentagram Ritual Massacre", "Sabbath 666", "Primitive Goat Worship" and "Unholy Horn Impalement", with standard lyrical themes of Satanism, Occultism, Desecration and Anti-Christianity. There are probably only a few songs with moments that leave a lot to be desired, due to riffs and drums occasionally sounding a bit out of rhythm. Another small issue I have is the vocal production, the overall screaming vocal style is okay but they sound too distant and pushed way back from the music, which is somewhat of an unfair treatment where vocals usually play an integral part in the black metal genre. These are very minor nitpicks that don't ruin the album as a whole and no one should hesitate to give it a listen despite the flaws mentioned.

Primitive Goat Worship does not fail to deliver what it promised, it is a release made by a very enthusiastic enjoyer of oldschool black metal, who after all these years managed to stay pure and primitive at the same time. Unholy Carnager brought Angelgoat back on its feet, or "hooves" in this case, with new fans like myself discovering this band and supporting the unholy legions of Serbian black metal. Večna slava Satani!