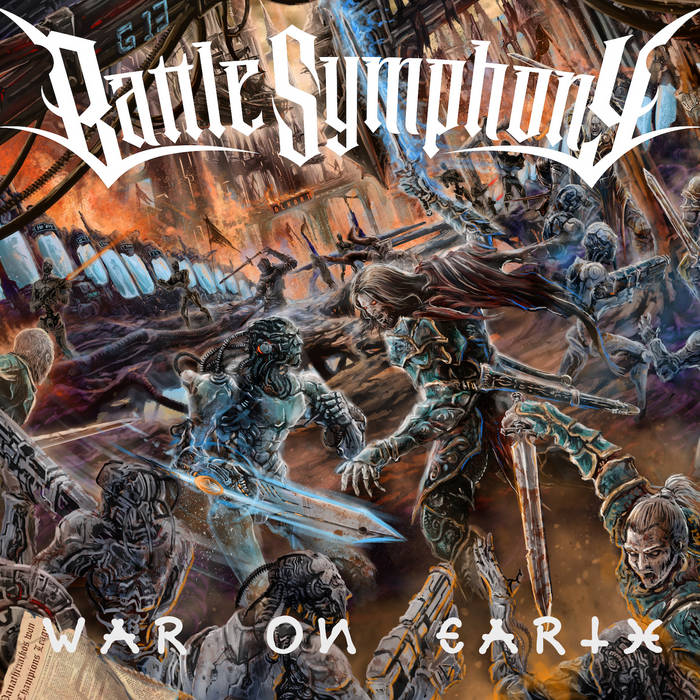 Metal Operas are a different kind of animal. While having a good cast of guest vocalists can be a shortcut to boost your project’s name and attract a lot of attention, sometimes the reliance on the guests alone leads to sloppy or lazy songwriting, a pitfall that many of the Avantasia offspring have regularly fallen into. Battle Symphony is the brainchild of Nikos Tzouannis, a guy I’ve never heard before, but he demonstrates a noteworthy ability of writing fantastic songs (wtf is going on in Greece?). Teaming up with the great Tasos Lazaris on the lead role of his space opera, Grigoris Giarelis handling all the wonderful guitar parts and Hector D. doing a fantastic job on drums and bass the band presents an impressive collection of songs in their first endeavor backed by an array of excellent guests.

Lyrically, the album tells a sci-fi story of war and conflict, a nice touch steering away from the usual S&S theme of most metal operas, and for the most part it works well. There are the occasional lyric mishaps but nothing too distracting or game-breaking.

The album is very well produced, and the sound is warm and organic highlighting all the little details with the keyboards prominently leading most of the songs. The performance from everyone is flawless and there are some moments straight from the golden era of power metal, like the banger 'Soul Survivors' with Tiranti killing it, or 'The Final Chance' with the sublime melodies and Lazaris’ performance of a lifetime. The style is what you’d expect after going through the list of guests performing here, a mix of heavy/power metal with big choruses, excellent vocal melodies and shredding solos, as well as a healthy dosage of space-keys many times reminiscent of Turilli’s “Prophet of the Last Eclipse”.

The songwriting is well thought-out and there are no bad (for lack of a better word) songs here, it just falls somewhat flat at times and the REALLY good songs stand out in comparison. Trying to pinpoint the problem, I’d say that the album is heavily mid-tempo and would surely benefit from a couple of faster songs to help with the pacing. A good example would be the self-titled closing track which I’m still not sure it can justify the 13-minute duration. The performance in there is top notch (we even have Daniel Heiman doing a short bit, ending it in a tremendous signature wail) but 13 minutes without a single change in key or tempo might be where I draw the line. Speaking of singers, everyone has brought their A-game here, the casting hits dead center and helps maintain the feeling of a progressing story which ultimately is the goal of any good concept album.

Battle Symphony makes a promise for a brighter future, and I really hope they can follow-up with a second album, because this one rocks and it can only get better. The good songs here are amazing and with a little tweaking here and there they could rival the best of power metal in recent years.