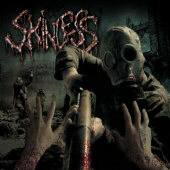 “From this day forward, my people will people will crouch and conspire, and plot, and plan for the inevitable day of man’s downfall. The day when he finally turns his weapons against his own kind. When cities lie buried under radioactive rubble. When the sea is a dead sea, and the land is a wasteland, and that day is upon you. NOW!”

What comes after the intro to this disgustingly beautiful album is easily some of the dirtiest, angriest, filthiest metal ever recorded.

Skinless are a strange bunch. They have never been able to reach the peak that this album offers in my opinion. For them, this was easily the height of their career. But what a height it is. The onslaught of absolute, unrestrained savagery on display here will leave you shocked. Rarely will you come across an album which sounds so incredibly angry that you have a hard time processing where all this disgust and hatred is coming from.

But wherever it’s coming from, I never want it to end. Despite the album clocking in at just under 37 minutes, it feels like you’ve been having your head kicked in for a week. There is no mercy shown on this album, no quarters given. There are no slow bits. There are no ballads. There is just assault, and enough distortion to level a small country.

Seriously, the guitar sound is one of the nastiest, grimiest things you will ever hear. I guess guitarist Noah wanted to replicate the sound of a tank, but what he got instead was a nuclear warhead. Every time he grinds a riff, it sounds like bombs are dropping on your face. All of the instrumentation on this album is fantastic though, riffs for days, you can literally hear the bodies being thrown on top of each other in mass graves.

The concept of this album is obviously war, as one can guess from the track titles and album cover, which stands out as one of my favorite covers of all time - as the image is quite an accurate description of listening to the music. A guy in a gas mask shoving a shotgun down your throat and pulling the trigger. Yup, this album certainly sounds like that.

Jason Keyser (Origin) does vocals on this album, and they are excellent. However, it makes me wonder why his vocals aren’t half as good for Origin. Either way, the vocal performance here is quite varied and packs a nice, thick punch. The general production, sound and mix on the album is what makes it so beautiful though. It sounds like a rotting tank covered in mud, rolling over fields of corpses, unleashing hell on earth. Honestly, this could not sound more perfect for the theme and vibe of this album.

A display in barbaric savagery, Trample the Weak, Hurdle the Dead should not be missed. If for some reason this has slipped under your radar, then it’s time to pick it up, give it a spin, and be decimated.