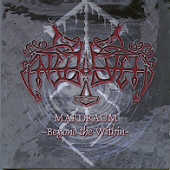 “Mardraum: Beyond the Within” is quite a step to make in one album. As the band claims, it’s a new era for them. I’d have to agree. “Blodhemn” showed the band playing in a rage, while “Mardraum” encompasses the elements that the band has shown before. Emotion, depth, epicness... it’s all here, and there is more. “Mardraum” is a textured and accomplishing album for the band and it is a perfect way for the band to state their new direction.

The album opens up with 'Større Enn Tid- Tyngre Enn Natt'. What better piece to open the album that this – one of the best songs Enslaved have ever written. It holds all the elements of this album in one song, but that’s not to say that just one track does the album justice. Every note on this album was written with a purpose, and it serves that purpose. The psychedelic influences really start to come out here in each song. While the band slightly hinted at them in the past, it is here that they actually come to life. Atmosphere is of the utmost importance in this record, and I can safely say it’s continuous and precise. It’s got a dark, epic feel to it the entire way throughout. The emotion on this record just bleeds through the music, and not just sections, but the entire album. All ideas on this album are unique and creative. From the production to the musicianship to the songs themselves, it’s completely unscathed.

The performance of each individual is above and beyond. Singer and bass player Grutle Kjellson does an excellent job. His vocal styles range from black rasp to death metal growl to epic clean vocals. He performs these all most excellently, and my favorite would be the clean ones. To date, these vocals are the best ever. They are so full of life and feeling. Guitarists Ivar Bjørnson and R. Kronheim are most excellent. Their work together is on a whole new level. They’re definitely one of the best guitar duos ever. Their abstract ideas work on a variety of different levels. Lastly, drummer Dirge Rep is no exception. He’s a truly underrated drummer full of great ideas and the talent to back it up. Enslaved act as a functioning whole when it comes to themselves as musicians, and this album shows it the best so far.

What makes Enslaved great is that they aren’t here to play typical music. It’s about exploration and pushing the boundaries, for themselves. At this point in time, “Mardraum” has to be the highest achievement for the band. Their atypical approach to song structure, composition, and sound is something that should be appreciated in today’s scene.

Bottom Line: It’s a safe gamble that fans of the bands previous work will find something to enjoy in this album, but if they don’t I can’t say I’m surprised. It’s a new direction for the band, and some people just won’t be up for the journey.