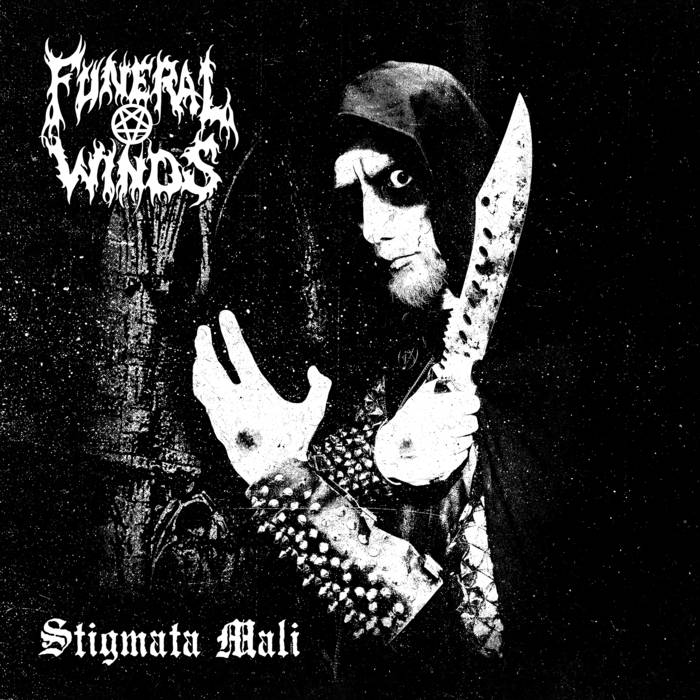 Some things are pretty clear to me. For example, there is too much violence in this world. Or: Licorice and my sense of taste will never be friends. And: the Osmose label promises high quality – and it is reliable. Yes, I know that the company from France released some almost painful albums as well, but whenever I hear their name, monuments like "Diabolical Fullmoon Mysticism", "Those Of The Unlight" or "Ugra-Karma" come to my mind. Not to mention "Pure Holocaust" or "The Jilemnice Occultist". With these aces up their sleeve, we can ignore Diabolos Rising and comparable nonsense. Given this situation, I expected a good album from Funeral Winds, a band / project from the Netherlands I did not really know before (shame on me in view of their plentiful discography).

Stigmata Mali is the seventh full-length of the lone wolf who runs this venture. His maturity is reflected by the coherent material. Okay, he avoids to integrate surprising twists and turns. Additionally, here absolutely nothing can be described as progressive. But he mixes mid-paced and bludgeoning parts cleverly, the guitar work constitutes a manifesto of pure black metal and the pretty raw voice does not lack the adequate quantum of diabolic vibrations. The songs do not beat around the bush, but draw the listener into their mood in a matter of seconds. This does not mean that the misanthropic "band" leader puts the emphasis on atmosphere. Keyboards do not occur. On the other hand, bestiality and barbarism also do not characterize the material. Here we get a little bit of everything with the effect that more or less generic black metal penetrates our ears – and this is simply good. At least those of you who appreciate the albums of bands like Vargsang or Blackhorned will probably share my opinion. Perhaps it is no wonder that behind these projects there is only one head too.

Especially during the parts where the double bass leaves its mark, it gets obvious that the production lends the songs a very welcome density. Another positive detail of the mix is the raw guitar tone. It feels like the (very dominant) guitar doubles the aggressiveness of the songs. Maybe the six strings should have left more room for drums and vocals, but that’s no big deal. The sound does not fall short of Osmose standards – and insiders know that these standards are high. So songs and sound go hand in hand. All eight tracks meet in relatively airy height and perhaps 'Ferocious Revelations' marks an appropriate appetizer due to its rather calm beginning and ending and the furious, slightly catchy parts that shape the centre of the song. So this is no album that can challenge the "Those of the Jilemnice Holocaust", but it’s an absolutely recommendable, modern yet tradition-conscious black metal output. And definitely better than licorice.