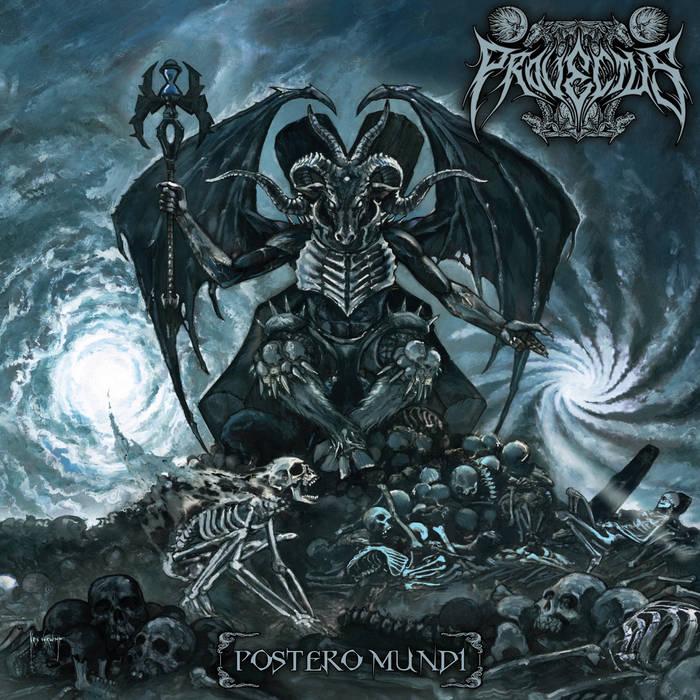 For the little country that Belgium is, we do have somewhat of a history when it comes to black metal. I don't mean to come across as chauvinist here, but the first few albums of Ancient Rites and Enthroned are total classics in my opinion. On the other hand, we also have that documentary "Black Metal in Belgium", which is embarrasing as fuck. Check it on Youtube, but don't come complaining to me if your forehead gets sore from your hand slapping it while watching that. Also from Belgium is Provectus, gracing us with their first full length, which thankfully is a lot less ridiculous as the aforementioned documentary.

Provectus deal in Scandinavian style black metal, the 90's way, but with a contemporary twist to it. Describing their sound, I'd put them somewhere between 90's Darkthrone, the early works of Emperor and Graveland, with some Dark Funeral and Enthroned added, and even some Belphegor in the distance. It has the raspy vocals, blast beats and tremelo picked riffing you'd expect from a band in this style, but Provectus also intersperses relentless blasting aggression with slower, more atmospheric parts, which makes the album as a whole sufficiently varied enough to stay interesting. The production is on the decent side, although it has the odd trait of sounding too gruff to be mainstream, yet that bit too slick to be a raw underground offering. I can't find any other way to describe it.

That they have a lot of ideas becomes very clear when you look at the running times of their songs, because it looks like they used them all. There are a good few that are around the seven minute mark, with one even going over 10 minutes. This is a point where I thought they could have trimmed the fat somewhat, because this is all on the lengthy side. Good thing they stuffed quite some variation in there so it surely isn't a slog, but I would not have minded a bit more compact songs.

To tie a ribbon around this review, I'd say that Provectus may not be reinventing the black metal wheel here, but it's a solid enough release to appease the black metal cellar dwellers out there. Within a world that has enough underground black metal bands to probably populate a small planet by now, Provectus make a good enough impression to stick out of the throng for sure.