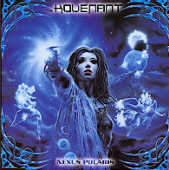 I was never really interested in Black Metal until I heard "In Times Before the Light" from The Kovenant. Just like Tristania opened the world of the Gothic realm, The Kovenant introduced me to a never-ending journey into the Black fantasy kingdom.

There's only one-way to describe these musicians: creative geniuses! No other band can combine in such an aesthetic way the complexed musical phrases found in Progressive music, the raw and electrifying energy of Black Metal, all this sophisticatedly dressed liked a grand symphonic opus! Too bad I just discovered them recently. What have I been missing all these years?

The awesome cover art invites you to travel on a magnificent musical spaceship. What is about to be discovered is nothing else but breathtaking and highly exciting. It won't take long before your ears and eyes to pop out from exhilaration. Every single song is a piece of art and the multi facet that will be unveiled right from the first notes, won't even stop after the last one so the urge to press play again and again is far beyond human volition.

Everything on this album is perfect, especially in the balance of instruments and musical styles. The sound is just great. The devilish vocals of Nagash are here simply perfect. Not too upfront or in the background. Devilish but not overwhelming. Sometimes screaming and other times spoken and even theatrical like on 'The Last Dragons' or 'The Sulfur Feast'. The beauty of all this variety is completed by an angelic singer doing the back vocals on almost every song and goes even with a duo Mr. Nagash on 'Bringer of the Sixth Sun'. The rhythmic partitions are as changing as the mode is moving from super fast to moderate but all this remain top notch in their execution. The progressive construction of these compositions letting not a single chance to boredom to settle. You can expect a very thrilling and ever changing direction in pace and mood. Sometimes hectic, other time solemn and calmer without becoming romantic but one thing for sure is the atmosphere throughout sustain an incredible and grandiose aura that nobody else than The Kovenant can achieve. Don't worry for the Black Metal elements because they are all there. Not only Hellhammer can play a very complex prog style drumming but he also can do the machine gun skin beating too. The guitars! Blackheart and Asternu are teaming up to show you what great rifting and lead/solos are all about. Guitars, plenty of tracks full of memorable partitions and different sounds including cool clean electric notes just like in the intro of 'The Sulfur Feast' and in other numbers such as 'Planetarium', 'The Last Dragons'. Now for the keyboards, do they belong in Metal, especially in Black Metal? You bet they do and this album is going to change your mind if you think otherwise. Majestic, grandiose and symphonic aroma just like a pipe organ in a cathedral. Every song is blessed with this magical ambiance thanks to Sverd and his synths.

Memorable moments in songs like 'Bizarre Cosmic Industries' for its piano passage with guitar riffs built like a classical composition, moving to a moderate piano / acoustic guitar segment with female vocals or 'Bringer to the Sixth Sun' with that great male/female duo, the keyboard taking a church organ sound and the riffs being at their best. The closing number 'Chariots of Thunder' is a real jaw dropping experience including a thrilling atmosphere made of great riffs, awesome keyboards sounding like percussions, good lead and guitar solos, then becoming a very progressive piece with a superb lead guitar run while the keys are more spacy to ends up with beautiful female chants and a drum beat like a marching band slowly fading away to terminate this amazing composition...

The covenant created here is of some of Norway’s biggest black metal talents, of space-age synths, symphonic elements, and female vocals. The result is astonishing and the sound is like that of no other black metal band. The reputation and style Covenant have earned is "symphonic black metal", and it certainly suits. Any musician worth his salt has figured out that any band still playing standard black metal is doomed, since the whole scene has gotten out of control and spun itself to hell. And who’s left standing? Oddballs Cradle of Filth and Dimmu Borgir, and innovators like Emperor, Satyricon, and, of course, these boys.

So let us begin the ‘Sulphur Feast’. The listener is probed by the instruments and the proficient compositions, while hearing about the cosmos being devoured by aliens, clowns and dragons. Black Metal’s reigning master drummer-Hellhammer-delivers the extreme beats and rhythms like no other, and often adds skillful and intricate jazzy parts with the hi-hat and cymbals. The majestic and glorious, yet somehow sinister guitar-synth melodies compel your soul, while Sarah Jezebel Deva’s beautiful "starsong" adds eerie feeling and passion. Blackheart and Astennu, the two guitarists, know what they’re doing and solos are not hard to come by.

The song structures are intricate and unique, never the same twice and the tracks are just fun to listen to. Lots of feeling, inspiration and hard work, the album is truly amazing. The excellent cover is done by the famous metal cover-art messiah Andreas Marschall. It’s also important to add that Covenant’s is one of the coolest logos I’ve ever seen, symmetrical, sharp, and, of course, totally indiscernible! Everyone here did their work and the result is remarkable! The two extra-outstanding tracks are 'Bringer of the Sixth Sun' and 'Chariots of Thunder'.