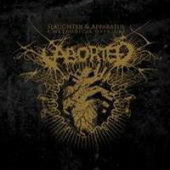 After an unbelievable "Archaic Abbatoir" I spent a lot of time on Aborted's website looking impatiently for any information on their new recording. The wait is over but the final product doesn't quite meet my expectations.

"Slaughter & Apparatus" is a piece of damn good death metal, but it's somehow missing that hook that would pull me in with every spin. I listened to this CD multiple times, and I couldn't find that something, that groove of theirs which would drive me insane. Each song on this album is very much like the one before it, or the next one after, with very few moments that grasp you by the balls and make you scream. When comparing this album to "Archaic Abbatoir", it is almost mundane, and in my opinion, the drummer's 'too technical' of a style takes away the groove and the chunkiness known from before. On top of this, Sven's upgrade of vocals from his deep growl to a mix of growling and screaming really is not doing justice to Aborted. When combining his vocals with the guest appearances on this album (Jeff Walker from Carcass, Jacob Bredahl & Henrik Jacobsen from Hatesphere), you have to really listen in to tell who is singing and when; Sven is no longer distinctive.

"Slaughter & Apparatus" is an album that is fast, brutal and intense. Unfortunately, the small amount of solos, slow-paced moments and chunky grooves make this album almost too plain and too uneventful. To sum it up: I expected a kick in the face. Instead - I got bitch-slapped.