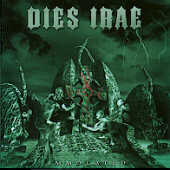 Since two members of this four-man band are from Vader I thought that those guys might be a little tired (from headbanging) and need to do something different. Such as start experimenting with different genres of metal. Man, was I ever in for a surprise.

From first track they hit you with the purest death metal in existence. No experiments, just blasting drums, fast guitars and Novy’s deep growls. Don’t get me wrong, I’m not complaining; I’m saying "YES, DEATH METAL IS BACK, back with a style!!!"

From "Zohak" to "Lion Of Knowledge" they take you for a tour through hell. This music makes the flames burn faster downstairs and for sure I’ll keep them burning by spinning this CD many, many times in my player.

Throughout the album you will hear some influences (Vader, Morbid Angel) but what did you expect when half of the members are from Vader. It doesn’t mean that Dies Irae doesn’t have its own style. They do and you have to hear this. I only hope Mauser and Doc can find the time for both of their bands because neither one of those great bands can afford loosing such a great musicians.