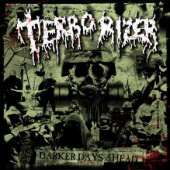 Two bands would have been well advised to omit any further release after their debut. The politically incorrect fun of S.O.D.’s “Speak English or Die” and the extreme whirlwind of World Downfall were not reproducible. This was clear for all to see, at least for all with an intelligence quotient of a limping ferret (or higher). But Sandoval and Pintado (R.I.P.) returned as well as Milano, Ian and Lilker - and the result of this bad idea was Darker Days Ahead. The first question was: where the hell did they lose Oscar Garcia? The new dude behind the mic consequently presented a one-tone-approach, powerful yet monotonous and, honestly speaking, without one iota of charisma. Worse still, his raw yet uniform performance matched the music.

Terrorizer’s second album has no chance to challenge its precursor. Especially the impulsive, punk-influenced energy of World Downfall and its outbreak of total denial are missing. Darker Days Ahead is a sinister death metal album with a tinge of grindcore, no more, no less, and it suffers from the total absence of individuality. Of course, one can listen to the songs without getting chronical diarrhea, but I think this alone does not deserve our attention, our applause or even our money. It is also out of question that Sandoval’s skills are remarkable. This morbid angel thrashes his kit by every trick in the book. The low-tuned guitars and his double bass driven machine gun snare drumming coalesce into a permanent wall of brutal noise and the band spits out ten songs that are vehement and full of negative thoughts, but one-dimensional and somehow soulless at the same time. Of course, “Dead Shall Rise” is still a good song, but it worked much better in the context of the debut. Everything is as always, you cannot beat the original version.

In view of the dense yet flat and lifeless production, the album appears almost banal. The songs come and go, one after another, and they leave… almost nothing. No chorus keeps sticking in the ear, no trail of devastation can be seen, and they do not spread an unmistakable aroma. In other words, this is no Terrorizer album, at least not one that has the right to bear this name. But I admit, one song has a special flavor and ensures a slightly better overall evaluation. The stormy “Ghost Train”, the piano dominated outro, shows the technical skills of multi-talent Sandoval once again and creates a very special atmosphere. The drummer violates the classic instrument with style and the fact the lead vocalist stays quiet is also helpful. However, one can give the full-length a solid percentage, but only if one ignores the band name on the cover. Everybody else must be “bigger than the devil” or (s)he will not enjoy albums like the second outputs of Terrorizer or S.O.D. - and I am sure that Sargent D shares my opinion.