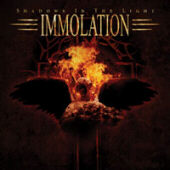 Close to a World Below is the band’s fastest and most ambitious record, with a battering sound that threatens to demolish everything in his path. The drums are set loud enough to emphasize the accelerated violence of the music rather than its dark and evil side, carefully done without drowning the strings. Shadows in the Light is an attempt to go back to that reckless brutality; with the polished sound they gained on Unholy Cult. The result is satisfactory, this album is a turmoil of asphyxiating darkness and agitation. It is turbulent but also meticulous with the melodies and sometimes unpredictable, armed with odd timings and tempo changes that won’t necessarily dictate how you headbang to it. If you want “squared” music you should pick some noisy grind instead.

Shadows in the Light it's heavier than its last couple of predecessors but it doesn’t stand out just for the destructive riffs, their sinful nature is latent at any moment, this is one of Immolation’s darkest works too. Song structures dwell between occasional heavy breakdowns with high pitched harmonics and drum beats thought to go along with the riffs. Fast and full of anomalies but most of all frantic and malevolent riffs accompanied by relentless blast beats are present too, and so are those dense guitar melodies whose only purpose is to push fear and despair into the heart of men. The gifted soloing this couple of guitarists display is always worthy of a mention and in this offer solos are delivered accurately and sharply with psychotic precision and lead changes between them several times. After so many years of dealing with high quality death metal I can’t see this band recording a bad album… They have been constant and loyal to the genre’s pillars of evil and brutality but at the same time have always been trying to write more elaborated music album after album.

This album's principal theme is that those decorative and almost doom passages are used often. Shadows in the Light main dish is Immolation’s classic belligerent and blistering trademark riffs. Of all the albums that follow Unholy Cult this is their most angry record. It also fits the “new'' neat and organized sound they coined from that album perfectly, it kind of put things in order. Drumming has been one of Immolation’s strongest points now that riffs aren’t 100% of the time as complicated as they were in their first decade of breeding NYDM. It’s fucking meteoric, blastbeats when they need to speed up things a little and punishing double bass drums for the slower and heavier riffs. The cymbal work pulled out on this and every record is the finest on Immolation, take for example the break in the middle of 'Shadows in the Light' and how he closes the hi hat unexpectedly in between his patterns, the guy sure knows what he is doing and he’s a fucking beast, even better than former member Alex Hernández I dare to say. Vigna and Taylor dynamic duet on the 6 strings has now a more solid body since the distortion they discovered on Unholy Cult, another highlight to the band’s sound. Ross Dolan’s vocals seem to be timeless, his diaphragm isn’t aging and his growls are as deep and crackling as the first day. His hatred for the Judeo-Christian beliefs hasn’t diminished with the years I guess, he really means what he yells. In fact, as recording tools go more and more advanced we can hear with more fidelity his vocal prowess. His bass guitar is again below the layer of guitar tracks in the mix, you can’t hear it individually so well but unlike in their first records, you can at least feel it and hear how it gives more weight to the recording overall.