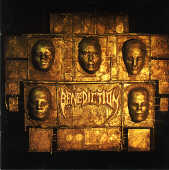 Type: Full-Length
Release Date: August 8th, 1995
Label: Nuclear Blast
Genre: Death
1 Down On Whores (Leave Them All For Dead)
2 Certified...?
3 Soulstream
4 Where Flies Are Born
5 Answer To Me
6 Griefgiver
7 Denial
8 Negative Growth
9 Path Of The Serpent
10 Saneless Theory
11 The Dreams You Dread
MetalBite on YouTube

The Dreams You Dread was the fourth full-length of Benediction and it showed a band that was sailing to new shores. The album sounds completely different than the stubborn, slightly amateurish debut, the very sinister second work or the pretty calculated Transcend the Rubicon. Benediction patted themselves on the back and screamed "hey folks, listen how mature our new approach is". Indeed, the well-produced output does not house infantile elements. But sometimes "mature" is just a synonym for "boring" and constant mid-tempo has never been a good idea. The title track brings the album to a furious end, its speed driven lines dish up a refreshing sharpness and vigor, the temperature is rising and a headbanging session begins immediately. But what about the ten songs one has to get through before?

No, they aren't bad. But let's look the truth in the eye, their pretty uniform configurations are tiring. Each and every track can be proud of its mostly strong guitar work and the one-toned yet powerful vocals of Dave Ingram. Nevertheless, I miss the anger and rage of the first works. Of course, The Dreams You Dread was released in difficult times (1995), more or less "reasonable" compromises were seemingly more helpful than a combination of high velocity and pure violence. Yet this does not mean that the formation was forced to publish a somewhat lukewarm work. The vast majority of the tracks is not able to develop its own identity and that's quite sad, because Benediction had already proven evidence that they can forge earworms. But here we have to keep a close eye on the track list, otherwise nobody knows whether we are still listening to "Griefgiver" or whether this is already "Denial" (just to give an example...). Hell yes, I remember a pretty good compilation from the eighties called "Speed Kills". This might be true, but endless mid-tempo is also deadly.

Speaking of historical comparisons, Tank come to my mind as well. Once they told us that "The War Drags Ever On" and the same applies for the tracks from no. 1 to 10. The opener distinguishes itself a little bit in view of its gloomy introduction and its cleverly designed song pattern. But maybe I would not recognize its quality if this song would have found its place in the middle of the running order. Benediction cannot keep up the tension and it remains a mystery to me why they did not realize this lack of exciting elements. It feels good that Benediction did not integrate soft parts or commercial ideas, but this alone does not shape an outstanding album. Remarkable choruses, riffs whose impact lasts longer than the song itself and unexpected twist and turns are missing, even though no part of the album suffers from incompetency.

Let the truth be told, there is a few number of fast sections in the first tracks, especially "Certified...?" releases the brakes. However, the verdict is clear. The dudes are not able to unleash their full potential. The full-length holds no embarrassing or half-baked sections, but it lacks dynamic and so The Dreams You Dread fails to achieve an outstanding rating. And it is an ironic twist of fate that the lyrics of the opener consists of quotes taken from the diary of a man who was supposed to be Jack the Ripper, but today it is the prevailing view that this diary was a fake. But even the diary of Adolf Hitler turned out to be wrong, so what... But Benediction has always been authentic and three years later, Grind Bastard showed impressively how good this band can be.