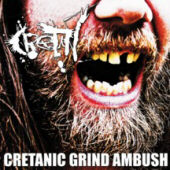 If a band's lyrical themes are described as they are on Metal Archives, being bizarre sex, humour and perversions, you can be damned sure I am paying attention. Who wouldn't? So without further ado: Cretin, ladies and gentlemen!

So you're probably thinking: a handful of narratives sarcastically dealing with sexual perversion poured into four tracks clocking in under seven minutes. Gotta be grindcore, right? And yes indeed, absolutely right!! And you have to admit, what's not to like from a concept like that?

Cretin's sound clearly has its roots in the early US grindcore underground, with Repulsion and Terrorizer being the most obvious ones to mention, but Assück, Atrocity and the early works of Brutal Truth are in there too. The insane velocity, frenzied blast-beats, distorted bass and growled vocals all point to those most hallowed pioneers of US grind, but the unpolished production also has me thinking of Blasphemy's "Gods of War" album as well. The aggressive music flies by in intense fashion and combined with the deliciously perverted and twisted fairy-tales that make up the lyrics, the insanity factor is upped to 11. Among all this grinding ferocity there are some ear-shredding guitar leads that will give that last remainder of mental well-being the final push over the edge, with the vicious vocals hammering the final nail in its coffin. This is old school grindcore heaven right here!

Of course one has to have a liking for stuff of this sort. It's not hard to imagine that the more mainstream metal fan will not be taken as much as I am with Cretin and this EP. The unpolished production and equally unrefined music is simply too harsh for mass-consumption, but for those into the bands mentioned earlier, this should hit that sweet spot without fail.

After all, thus is the faith of true underground art, simple as that.