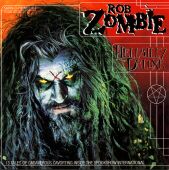 Ahh, here we have the most famous work of the one we love to hate and hate to love. Adopting more and more musical changes and tried-&-true methods to make it in the North-American market, Rob has left the "Zombie" tradition and style yet further behind him. The phrase "sell-out" of the punk-rock ideology quickly comes to mind but it doesn't linger long after the mandatory mainstream singles "Dragula" and "Superbeast" are finished early in the recording. The real songs have a strong beat, catchy riffs, plenty of hooks, and of course old horror movie themes Rob is so famous for, definitely interesting!

Well I have to say that the insanely heavy and punchy guitar work of songs like 'Demonoid Phenomenon' and 'Meet the Creeper' took me completely by surprise! The simple but highly perfected mesh of modern heavy metal with techno brought to life and given a personality by constant sounds and clips from cheesy old horror flicks is a model example of originality to today's metal world. Not impressive in terms of musicianship and purpose, but this is sure as hell entertaining!

The fillers get annoying, yes, and there seems to be more of these than actual full-length compositions in the album's half hour. The songs stand strong on their lonesome but do not conform too much in an overall structure of the album and since the good tracks are few in number and always short, the CD seems to end way too quickly and not quite give you back in enjoyment what you paid for in cash. The other fault is the one that always plagues songs formulated to be simple and catchy, they get boring and they get boring fast! The hook you the first time, you buy the album, and then two months later you wouldn't recognize Rob if you ran into him on the street.

Now I'd be lying if I said I consider Rob Zombie nu-metal. He knows his way around in the music business and knows how to make an album sell and still make kick-ass music that avoids many sacrifices necessary in gaining popularity. Anyway, 'Living Dead Girl', 'Demonoid Phenomenon', 'Spookshow Baby', 'Meet the Creeper' and '...Phantom Stranger' are all choice pickings from "Hellbilly Deluxe". The rest are either filler or oversimplified singles. This is a hard album to swallow for traditional metal fans but it is different and very entertaining. Good party music!