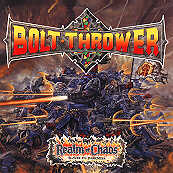 Only one year after Bolt Thrower released a quite impressive debut with In Battle There Is No Law!, they lay the metal world in ruins with Realm Of Chaos: Slaves To Darkness in 1989. One notices directly that the band has clearly improved their playing. Also from the design of the cover there are worlds between their debut and Realm Of Chaos. Of course, this is also due to the fact that they have now signed to the already renowned label "Earache", which at that time had virtually everything that had rank and name in the scene, but certainly also to the band itself. The rather cult cover was designed by "Games Workshop", which the band thought was pretty cool at that time (by the way, that's where the name "Bolt Thrower" comes from - a kind of crossbow in the "Warhammer" universe). But not only visually the band often moves in the Warhammer world, but also the lyrics are partly about it (for example 'World Eater' or 'Realm Of Chaos'), otherwise about the usual topic of war.

Musically it can be noticed that the band doesn't fall into the chaotic structures like on In Battle There Is No Law! anymore, but everything plays out a bit more catchy and comprehensible. The guitars sound much more structured, you can easily recognize the typical Bolt Thrower riffing, also the drums sound much more differentiated, powerful and controlled, only Karl's voice sounds a bit tinny in my opinion. You can already recognize the Bolt Thower typical vocals, but the voice could have used a little more pressure.

The songs are like a steamroller. After a short intro 'Eternal War' rolls the listener flat. A wall of riffs and drums, which is only sometimes reduced in tempo a bit, only to pick up speed again directly. Also the other songs are kept in a similarly high tempo and hardly let the listener breathe. Only 'All That Remains' is a somewhat doomy song, where you wait the whole time that it increases in speed. What is noticeable in 'Realm Of Chaos' is that the band continues to incorporate many grindcore passages into their songs in addition to elements of death metal, so the songs still sound pretty raw.

Particularly noteworthy songs are the aforementioned 'Eternal War', 'World Eater' - for me the oversong on the album (the riffs alone are awesome) and 'Realm Of Chaos' (pure death metal). These songs are the ones that match the typical Bolt Thrower songs to come. Realm Of Chaos: Slaves To Darkness is, in my opinion, the album that has laid the real foundations for the further releases and is therefore highly recommended for anyone who wants to get to grips with the band.