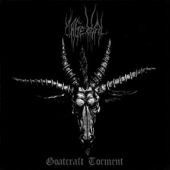 The Norwegian black metal campaign against Christianity was the most exciting development in terms of extreme metal during the nineties. To be more precise, it was the only exciting development. Apart from these pitiful surrounding circumstances, the hordes from the top of Europe spread their violent, sometimes criminal message around the entire globe. Urgehal from Hønefoss released their first full-length relatively late, but they have proven that they are able to preserve the spirit of the nineties.

Their full-length from 2006, the here presented Goatcraft Torment, makes no secret of this fact, to express it carefully. The album is nothing less than a journey back to the starting point of the Norwegian war against the establishment, not in terms of amateurish awkwardness, but with regard to the chosen style. Symphonic orchestras, keyboards or acoustic guitars, "beautiful" female voices - all these things do not have a place here. Without making any kind of lukewarm compromises, Urgehal search for the essence of the genre and they do it successfully. Their very dense, shady and strict way of proceeding creates a totalitarian regime where no song is allowed to develop its own identity. Room for personal liberties is not given, all tunes have to march in step. To avoid misunderstandings, this is a very good way - and perhaps even the only one - to keep in touch with the essence of black metal. This applies all the more with regard to the high quality of the material. The misanthropic horde tyrannizes the audience with malignant, sharp riffs, fierce leads and mostly fast-paced drumming. Especially the guitar work embraces the listener forcibly. It does not only offer a high degree of grimness, it also contributes an adequate level of diversity and the necessary modicum of melodies. Hand in hand with the intelligently integrated tempo changes, the guitars generate dynamic tracks that have never heard of the European Convention of Human Rights and comparable, absolutely nonsensical bullshit. Instead, they rush forward without even thinking about the devastation that they cause.

Each and every piece makes a strong contribution to the album with the effect that a monolithic overall impression is emerging. Stubbornness is a value in this context and believe me, Urgehal are not interested in being open for other people's point of view. Ultra-heavy and very black harmonies liaise with the relentless, in rare cases nearly hectic drumming. This alliance is responsible for the fact that the lead vocals do not characterize the album. They did not fall by the wayside during the recordings, but the guitars dominate these 51 minutes of painful consequence. Therefore, the genre-typical vocals, obviously contributed by a probably ugly gnome, score with their raw and vicious performance, but they do not make the record to something special. However, Goatcraft Torment possesses other qualities. Especially the compositional class of the Norwegians is remarkable and ensures that the album is filled to the brim with evil-minded highlights. I would like to mention "Gathered Under the Horns" with its dissonant beginning and the pretty hymnal leads at the end of "Risus Sardonicus", which combines levelling mid-tempo leads with more furious, partly blast beats driven sections, at this point.

But once again, I must say that there are no significant quality differences between the individual songs. "Antireligios" is wildly galloping over Norway's darkest landscapes, while the martial "Dødsmarsj til Helvete" impresses with its desperate mid-tempo approach (but a short outbreak of velocity is also included). "Selvmordssalme" scores with explosive sections and a gloomy break, too. Well, every song should be mentioned, but let's say it more generally: all of them are imbued with hatred, negativity and total bitterness (and feel free to add comparable attributes, they will all fit.) The band does not shy away from stereotypes, but do not expect any kind of naivety when it comes to song titles such as "Satanic Black Metal in Hell". Urgehal kill with both precision and vehemence and they spit in every face they see. What a shame that Goatcraft Torment was released too late. If it would have seen the light of day in the early nineties, we probably would call this work a true classic of Norwegian black metal. Highly recommended for fans of "Pure Holocaust" and "De Mysteriis Dom Sathanas". Less recommended for fans of... well, I don't want to mention shitty formations at this point. This would be unfair to In Flames, HammerFall or Manowar.