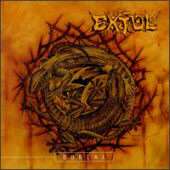 This is, without doubt, the best piece of technical/progressive extreme metal I have ever heard. The album features a lot of diversity among the tracks, which is very enjoyable if you ask me (from the blackish 'Celestial Completion' to the progressive 'Reflections of a Broken Soul'), furthermore this is the album which widened my taste in metal towards black and progressive metal.

I cannot praise enough the great work Ole Børud and Christer Espevoll on the guitars, those two guys are responsible for a variety of riffs ranging from Carcass-worthy melodies to fast and explosive openings ('Embraced'). Extol showed progressive elements in their music from the early beginnings, a slight hint of the upcoming style can be heard on their three tracks on the Northern Lights compilation. But it was the genius of Ole Børud that led Extol into the progressive waters. Christer is a great guitarist, able to play different tempos and very creative in writing. Burial doesn't lack any aggression and I can confidently say that we can thank Christer for that.

The drumming is almost flawless, although this judgment is based on my personal taste. David Husvik's drumming suits Extol like 7.62×39mm cartridges suit an Ak-47... Pure perfection. I usually prefer fast drummers, which do not mind hitting the pedal so often that I start hearing an unrecognizable white noise, which just overheats my mammalian brain. Yet David managed to fill the gaps perfectly, dictate a decent tempo and cooperate with the guitars in mind-blowing harmony.

Speaking of vocals, Peter Espevoll is surely a great talent and knows his art well. To the question, if he is the greatest I can clearly say no. Nonetheless, he put off an unremarkable performance, switching from growls to his shrieks, mastering them almost as if they were his natural way of communicating. He is undoubtedly an extraordinary vocalist and his incredible shrieks built an atmosphere that I never have seen since this album. Ole did the backing vocals for the album, proving the range of his talent. His melodic singing voice and the capability to sing higher than any power metal vocalist contributed to the diversity and definition of Extol's absurdly enjoyable progressive style.

Eystein Holm's bass had plenty of technicalities, going always along with Ole's and Christer's guitars. I would still say that it lacked some strength in comparison to Tor Magne Glidje. He filled the gaps and did his work as a bassist very professionally, still, I have to mention that Eystein didn't dare to go too deep concerning creativity.

Christian lyrics and ideology follow every single written line on this album. Artistically speaking I have to say that the vocabulary was well-chosen, and I generally found myself liking the most of their texts. But I assure you whatever your worldview is supposed to be, that it is worth listening to this album for the sake of metal's beauty.

If I had to recommend a track, it would be nearly impossible since loved every single one of them. But three tracks are excellence in its purest form: