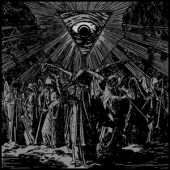 Casus Luciferi was the first album of Watain that blew me away. Expect nothing less than eight songs of profound blackness, filled to the brim with evil, cruelty and well, musical talent. All these characteristics show up right from the beginning. The well-chosen opener combines raging aggression and desperate misanthropy. Better still, it does not wait to show the listener the shortest way to the sulphurous, fiery and torrid place called hell. Already the first tones of 'Devil’s Blood' sound excellent, triumphant, dark and promising. They find the perfect balance between spirituality and violence. It is therefore only natural that the typical black metal maniac wants to get more of this sound immediately and Watain do not disappoint their audience. It might be true that some songs have less clear contours than the overwhelming opener. I also realize a marginal lack of individuality. The complex pieces are cut from the same cloth and so they do not differentiate much. All of them spit on conventional patterns and the degree of vehemence remains more or less the same during the entire work, but that’s really no big deal.

On a positive note, the homogeneous approach underlines the holistic vision of the Swedes. This milestone of diabolic art works as a whole and maybe it is no disadvantage that all songs spread similar vibes. Bands like Bolt Thrower have proven that precisely this way of proceeding can result in an album where the whole is more than the sum of its parts. In this respect it is absolutely no problem that a piece like 'Puzzles ov Flesh' does not fully reach the class of the opener. Or – to let the cat out of the bag – of other outstanding monuments like 'From the Pulpits of Abomination'. It is of much higher relevance that the song blends seamlessly with the remaining material.

I have mentioned the complexity of the tracks, but I must add that this feature is not at the expense of their flow. The pitch-black lines do not get hurt by abrupt or overly edgy breaks. Watain’s instinct for conclusive compositions does not leave them in the lurch and it is exciting to see that the enormous effect of their apocalyptic melodies remains untouched by the frequent tempo changes. The excellent steadiness of the material is not weakened by the admirably great number of diverse sections per song – and vice versa. This alone shows the compositional brilliance of Watain; and it does not matter that one can, of course, find trace elements of the two Dissection classics or the early Dark Funeral outputs in their sound. Especially the great harmonies of the 'Black Salvation' remind me of some masterpieces of Lord Ahriman’s (mostly lazy) squadron.

The alarming, evocative guitars at the beginning of 'From the Pulpits of Abomination' leave no doubt that the listener is getting closer to the grand finale which consists of this excellent, high-speed dominated eruption and the equally fascinating title track. Although its clocks in at almost nine minutes, it is thrilling and excellent from the beginning to the end. This is not my opinion, this is simply true. Everybody who begs to differ is a miserable liar who deserves to listen to the whole catalogue of Avantasia. At least three times in a row! But aside from draconian punishments for the aforementioned group of disoriented clowns, Casus Luciferi is a very good foundation for having an inspiring black mass and the fact that it benefits from a more or less perfect mix is nothing less but the crown on the terrifying head of Satan. Two outstanding pieces at the beginning, two outstanding pieces at the end and very good stuff in the centre shape a dense, majestic monument that sees no sense in acoustic intermezzos. No doubt, it leaves the serious reviewer no chance to give less than 9. And maybe / probably / surely my reviews cannot be taken seriously, but I also vote for nine points out of ten. Or perhaps 9.2 – this is my honest opinion and it underlines my seriousness.