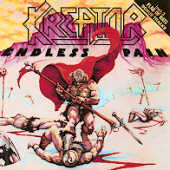 It wasn't long before thrash metal would make its way from Canada and U.S.A. to Germany of all places, a country that was seemingly more into pop rock and progressive acts a decade ago, a country whose primary language isn't English, and a country that was considered an enemy to the west in the last major war. Looking back on it from today's viewpoint this is just common knowledge that Germans could thrash just as hard, if not harder than their western progenitors, but if I had been growing up when thrash metal was at its most relevant, I would not help but question why Germany caught on so quick as compared to say, the United Kingdom, the country where metal originated from... and apart from Onslaught, I honestly can't name a single thrash band between the years 1983 - 1986 stepping out of the British isles, apart from arguably Venom. Germany on the other hand, did have a handful of notable acts, today the only ones that ever get mentioned are Sodom, Destruction, and Tankard to a lesser extent. Oh, and of course it would be an absolute tragedy not to mention the legendary Kreator! But Germany was a goldmine of early thrash metal, not just the often touted acts above, but we shouldn't forget to mention the lesser known bands like Holy Moses, Exumer, and the speed metal act Living Death, a band that proves Germany was on the scene at least as early as 1984.

Apart from a historically impressive track record, the releases from that time to come out of Germany were top-notch, and far more brutal in my opinion than acts going on the western half of the globe, at least the ones in the Northern Americas. A band like Kreator seems to take the brutal elements of say Slayer, perhaps even Sepultura and mix them with the speed metal antics heard on Metallica's "Kill 'em All", with vocals being prototypical death metal style, before death metal was ever a thing, and guitar riffs that were either going to be chugging speed or more brutally bludgeoning than Slayer. German pioneers Sodom would take the brutality a step further on their debut "Obsessed by Cruelty", it really showcases that Germany seemed to come from a different perspective when it came to how they like their thrash. Meanwhile, flash-forward a decade later and Pantera seem to be incapable of not repeating themselves of how each of their albums surpasses the next in terms of heaviness. Sorry, as much as I love Pantera, bands like Kreator and Sodom really do make their pompous attitudes and shameless gloating look really naive, especially so when bands like Kreator are performing on equipment that costs less than half the price.

But I wouldn't go so far to say that Endless Pain is a "raw" album. Quite far from it actually. This is one of the best sounding early thrash recordings out there. It's not plagued with Destruction's paper thin, hollow and weak debut, "Infernal Overkill", and certainly not as low end heavy or as dark and brooding as the dungeon dwelling debut album by Sodom. Everything is very lively on Kreator's debut and seems to blast out of the speakers with full force, while still maintaining the chaotic and frantic pace invented by the likes of Venom, to be refined by Slayer. Re-releases would clean it up even further, such a process would typically gentrify an album's uniqueness, yet Endless Pain remains fresh and alive to this very day. In fact, I believe the album has obtained a better sound with subsequent remasters.

Many of the thrash bands to come from Germany would get a reputation for being far more "technical" than most other bands of the genre. Kreator would be no exception to get this kind of praise from fans. I personally don't find Endless Pain to be all that intricate, though there are some very inventive and complex riffs scattered throughout, especially the intro riff to "Total Death". One would have to look up a guitar tab to verify precisely what Mille Petrozza and Roberto Fioretti are actually playing here, it really sounds like the guitar are vomiting up their notes. I know that's a weird way to describe a guitar riff, but it's just so quickly performed without much cadence utilized to emphasize anything that's happening. The execution is not sloppy mind you, Kreator certainly had better chops than most acts, as evidenced by the song to follow, "Storm of the Beast", my personal favorite the album has to offer for its guitar riffs alone. It's also one of the few moments on Endless Pain where the band slow the tempo down for a short moment during the chorus, another standout slower moment being the intro to final track, "Dying Victims". The final track sticks out like a sore thumb with its "Don't Fear the Reaper" guitar intro coming unexpectedly before quickly bringing everything back to Kreator territory.

If you were to ask my opinion for the best thrash debut to come from the big four from the U.S.A., my answer would be an easy vote towards Megadeth's "Killing is my Business... and Business is Good"!. Germany's power trifecta consisting of Kreator, Sodom and Destruction is certainly a harder decision to make as I'm not as familiar with them, though the consensus would certainly seem to point to this album. I personally would need to revisit the other two again before making a final decision, but what I can say is that Endless Pain is a hard album not to like if you're a fan of thrash metal. It's a straight-forward, mostly simple album apart from whatever Ventor is doing on the drums throughout most of the album, not to mention he also happens to split the vocal responsibilities, and actually provides vocals for every other track on the album, I happen to prefer Ventor's vocals, though they tend to be more wacky than Petrozza's menacing, more accepted vocals, I still wish he would've done more on subsequent early releases such as Pleasure to Kill and Terrible Certainty. While it's not the most inventive thrash metal album out there, but certainly one that shouldn't be forgotten among the great B-tier list of thrash classics.

Superchard gets super hard for:
'Flag of Hate'
'Storm of the Beast'
'Son of Evil'

Some years ago, Mille spoke in an interview about Endless Pain. He said that Noise Records had booked the studio for two weeks. Yet the band members were very proud of the fact that they were able to finish the recordings within ten days. In hindsight, Mille could no longer understand this amateurish, anti-perfectionist behavior. But it gets even "better". Quite frankly, the album sounds like it has been recorded not within ten days, but within ten hours. Anyway, exactly the non-professional approach and the fairly awkward production lend Kreator's debut its special charm. Although it is defaced with one of these shitty Lawvere paintings, Endless Pain has become an important time document, not only because of the amazing career of the band, but also because of its musical content.

Okay, one cannot say that the album was highly original. Kreator wanted to sound as demonic, evil and abnormal as possible, but their closest competitors, Destruction and Sodom, pursued the same target. Furthermore, "Endless Pain" holds some riffs that had previously been used by others. "Total Death", for example, reproduces the riffs of the chorus of "Strike of the Beast". Don't get me wrong, I don't think that the trio copied these sounds deliberately. It is just a fact that a few parts of the album lie in close proximity to sections of other tunes. Yet Kreator also wrote outstanding guitar lines that triggered a fresh and energizing breeze. "Bonebreaker", a close relative of "Total Death", started with a riff that had the power to wake the dead in a matter of seconds. Both "Bonebreaker" and "Total Death" demonstrated that the young Jürgen "Ventor" Reil was able to manage very fast rhythms. "Tormentor" is another straight, unfussy and fast-paced rocket, but Kreator had slower fragments in their repertoire as well. Thus, let's put an eye on "Storm of the Beast".

Its beginning celebrates the triumph of simplicity. Ventor plays a primitive four-four time and a forceful guitar sets in and increases the tension. The song turns out to be another speed-driven, ugly monster, but its chorus slows down the tempo and the ending picks up the intro sequence again in order to close the cycle. "Storm of the Beast" does not show the highest compositional brilliance, but it is coherent and catchy in its own way. "Cry War", another fine mix of mid-paced and rapid parts, follows a similar line. By contrast, exactly the opener and title track create nothing else but an awkward sounding noise and I also never understood the structure of "Son of Evil", despite its actually strong beginning. Well, as the oh so wise guys like to say, every beginning is hard. Even the special thanks section was strange. It listed their parents (good boys!) as well as "the girls that we f**k" (not so good boys!). But how many girls wanted to be f**ked by one of these three unwashed outsiders? One? Or even none at all?

Despite these irritating details, Kreator's debut was an important statement. It made clear once and for all that energy, ambition and conviction beat technical musicianship. Unlike the aforementioned guys of Destruction and Sodom, they did not start with an EP, but with a complete album and therefore we got the full dose of juvenile anger. Even in 2017, Mille's, Ventor's and Rob's thirst for action is still tangible. Inspiration was the magic word for the band as well as for its noise making surrounding. The movie "Thrash, Altenessen", which is available on YouTube, shows the fairly harmonic yet restrictive working-class milieu where the band members grew up. Furious thrash was the tool to break these chains. Nobody could foresee that Kreator would become a force to be reckoned with, but one thing was certain: this debut came straight from the heart. Among other things, this feature makes Endless Pain so valuable.