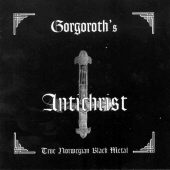 The amazing number of reviews indicates Gorgoroth being a very relevant band in black metal. Well, I try to avoid the usual, reflexive reaction of a representative of a minority, but I am not able to prevent that the word “overrated” comes to mind. I agree that Pentagram was and still is a great work, but it remained an isolated case in the wealthy discography of these mediocrely talented dudes. Already Antichrist initiated the decline – and to call a release with a playtime of 25 minutes a full-length says more about the marketing skills of the band and its management than about the musical relevance of the material.

However, Antichrist is not the dung heap of Norwegian black metal where a grim and lonely cook crows. It is almost painfully reduced to the essentials of the genre (the title, the artwork, the picture of Infernus, the black-and-white design), but it cannot be denied that it made its contribution with respect to the development and definition of the aesthetics of Norwegian black metal – and we do not need to discuss that these aesthetics had an overwhelming influence on the rest of the growing global scene. But Gorgoroth fail in the main category. The songs do not convince. Their melody lines are pretty simple and do not draw the listener irresistibly into the music. I don’t speak of the absolutely useless 20-seconds-intro and I also don’t want to lose many words about the lame, powerless and lukewarmly tempered closer. It is bad enough that Gorgoroth dedicates a quarter of the playtime to this prototype of retirement home black metal.

The songs between these two nadirs are comparatively powerful. A few icy lines point into the right direction, the vocals convey grimness and if the drums would be audible I could identify some pretty rapid sections. This is not to say that the production completely sucks. It mirrors the coldness (and the attractive imperfection) of the early stage of the subgenre. Moreover, even the bass can be heard from time to time. The real problem is, as mentioned before, the song material itself. For example, the band anthem 'Gorgoroth' has a great, furious ending, but its first five minutes meander through the endless morass of irrelevance. 'Possessed (By Satan)' is also opened by mid-paced parts and mutates into a speed monster, but here we have the lucky situation that everything works. The riffs at the beginning flatten the surface and so the swift section can unfold its energy without any handicaps.

Antichrist has its moments and it mirrors the charm of the ancient days of the genre’s second wave to a certain extent. Nonetheless, it stands in the shadows of albums such as "Diabolical Fullmoon Mysticism" – and it only sees the rear lights of masterpieces like “In the Nightside Eclipse” (but only if it uses its binoculars). Worse still, the so-called full-length does not even come near to the class of Pentagram and up until now, Gorgoroth were not able to reach the form of their very early days again. And it is absolutely no consolation that Immortal, Emperor and many further bands from the golden era of black metal lie in ruins as well.