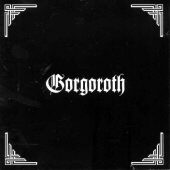 Frankly speaking, I believe that Gorgoroth are overestimated. Too many weak outputs are connected with the band's name. But I freely admit that they also released pretty strong works. Pentagram is the best one. If someone likes to discover the original spirit of Norwegian black metal, he (or she?) is well advised to dive deeply into the here presented material.

Gorgoroth present an overdose of hatred, scorn and negativity. The album holds simply or even primitively constructed songs, but their seemingly uninspired structure does not indicate a lack of substance. Okay, in view of the inappropriately short playtime, a lack of substance would have been inexcusable. Yet, as mentioned before, fortunately this is not the case. Although there is only a minimum of riffs per song, these riffs have been very well selected and they cause an enormous effect, regardless of the fact that they are minimalist as well. The insane vocals - with a lot of reverb on it - reinforce and optimize the effect of the guitar work, because they are very focused, too. One realizes that the group has reached the core of the black sub-genre and the spirit of the album expresses the boundless misanthropy of the artists. No doubt, here we have a holistic approach which has the aim to create a pitch-black listening experience. The reduction on the essentials, which is inter alia mirrored by the unpretentious artwork, is either voluntarily chosen or the guys had no other ideas; anyway, the album works.

There are some really fast songs, but velocity is not the main focus of the band. Gorgoroth concentrate on spirituality and attitude. The album embodies the mentality of the second wave of black metal. Maybe one can even say that it was one of the outputs which defined the sound of this wave. Technical gimmicks or aesthetic nuances do not play a role, the guys rather behave like a horde of lumberjacks who have the ambitious aim to beat off the entire forest until dusk. Consequently, they march straight ahead - and the result is remarkable. "(Under) the Pagan Megalith" has machine gun riffs that pave the way for the deranged screaming, "Bergravelsesnatt" kicks off the album with an excellent flow while offering a combination of speed, pressure and vileness, "Katharinas bortgang" mixes pain, insanity and intensity with the result that whirring guitars and pitiless drums create another example of primordial black metal. Well, I could mention almost every song in this context, because they all blend harmoniously with the overall picture.

The production finds a good balance between a credible underground work and the demands of a scene whose expectations in terms of hi-fi technology are rather too high than too low. But technical specifications are not the main issue of Pentagram. Back in 1994, Gorgoroth presented a hot-blooded yet icy clump of hatred and they were among these mainly Norwegian guys who opened the door to a new dimension of extreme metal. No doubt, Pentagram deserves our respect due to its musical content and the date of its release, no matter what happened afterwards.