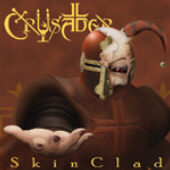 When a band is way too cheesy to be taken serious, even a little, is a challenge to review. Some bands are (80's Hair Metal come to mind) too cheesy to ever be taken even lightly and makes it impossible to deal with and it is really looked upon in a bad light. Some bands can pull it off and it can be fun as hell, but most can't. What can I say about Belgium based traditional
metallists Crusader? Cheese Kings?

These guys can be pegged as smack dab in the middle of the 80's. With standard riffs and vocals, this band makes the bad choice of channelling the metallic 80's like a phantom Ouija board. While I could overlook the very dated and horribly arranged guitars, it was the cheesy and very much unwanted keyboards that hit me - they don’t fit here. Sounding like someone doing a very bad version of Deep Purple when they have had only two lessons, the keyboards were a glaring screw up.

With the worthless music and even less worthy choices, the whole thing was recorded very bad, and made every song a nightmare to hear. Each song was only good when it was over-then the horror continued when the next track played. I heard that they had a two other releases, and I hope that they were better... anything would be better. This just was one of those albums that was better off not being made.

My information tells me that they have broken up and I think that was for the best. For the betterment of the metal scene all around the world. Forget about this album completely - there are many more bands that are real bad, and still would be better than this. I am on a crusade to get rid of bad metal. Crusader is one of my targets.

After picking up fantastic Thurisaz's "Circadian Rhythm" I decided to check another band from Shiver Records, Crusader and their new opus "SkinClad" hoping for one more slab of inspiring music. Well, my greed was punished with the most dull, flat and overall painfully boring heavy/power metal record I've heard in a long time. Very simple composition, primitive keyboard lines, overexposed vocals and mediocre production sums up this piece of plastic. Whoever writes those songs has very weird sense of melody and harmony cause not even one track caught my attention and unfortunately in this type of music that's a key element. It's almost like listening to a garage band that starts to understand ins and outs of writing basic compositions but it's still few years behind its first record. What's amazing that "SkinClad" is Crusader's already third album and outside of few lead guitar parts nothing on this record indicates musicianship expected in that phase of band's existence. Anyway, I learned my lesson... I'm not listening to anything new today.