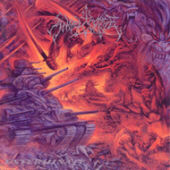 Talk about an abomination! This album reminds me a lot of 'Panzer Division Marduk' in intensity and vocal-wise. However, this band was not strictly black metal, they are blackened death metal. I haven't heard much from Angelcorpse only Hammer of the Gods, their debut but I wasn't taken aback. Only with this one, it redefines what is that to which makes a perfect album. The intensity is high, good to play on days where you feel sluggish and want something that contains the utmost amount of intensity. The guitar riffs and vocals are my favorite parts of the whole album. It just never lets up. Track after track just blows you away.

The production quality is a little raw, but it complements the music. The only instrument that I don't think was the greatest that was mixed were the drums. I think everything else is just perfect. The lyrical content isn't much to my interest, but the music totally is. The leads are quite good, they use the wah-pedal quite a lot and the riff-writing are strong. I'd say it's unrelentingly strong. That's what makes the album hard to top in their entire discography. It's a shame they're split-up. Maybe one day they'll reform, but a fat chance of that happening. What the focus here are the vocals and music mostly. That's what sucks the listener in.

Totally blackened death metal to the maximum. Their debut suffered a little bit, but I see (aside from the drums) nothing intrinsically wrong with anything else. The energy and unrelentingly uncompromising metal just suit the description of the title of the release. In this case, it's your eardrums that they're exterminating. Such vigor and music that's totally original and likable. It falls short nowhere. That's the reason for the perfect score. There aren't many albums in this sub-genre that tops this release. It stands in a league of its own. I wouldn't say leave out all the others they put out, just this is a favorite of mine.

Not that it matters wholly anymore if you download this and take a listen or download and buy the album on CD. I did both and was happy to do so. There aren't many albums you find that contain a perfect score. By other reviewers as well. They did this release justice as well. It's just that there aren’t any tracks on here that aren't good. They all are equally intoxicating. I recommend this one to people in favor of alternate forms of metal. Kind of like Sathanas, who falls in the same sub-genre and keeps making more and more music. It's a unique style and Angelcorpse simply dominates the whole album. Own it today, in any form!