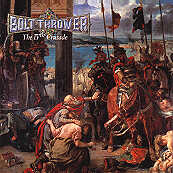 Bolt Thrower, we miss you. No other band can or could write such riffs that appear as the perfect melting pot of melancholy and menace, sadness and heaviness and, last but not least, majestic feelings. It goes without saying that the opening title track is precisely kicked off by such a riff. It’s great to press the start button and being catapulted into the sonic battlefield of the British legend in a matter of seconds. Just 10 minutes later, their signature riff opens 'Embers' and honestly speaking, I do not know any better acoustic Deja-vu.

The IVth Crusade was another step in the evolution of the band. Of course, they did not change the style after their third album. The modifications between the debut and Realm of Chaos: Slaves to Darkness marked the ultimate change. But the band was in search of perfection within its self-chosen, narrow stylistic frame. The girl and the boys intensified their music more and more and each and every tone reflects the dedication of the protagonists. Tracks like the almost epic 'Spearhead' with its partly tribal / militaristic drumming and the all-swallowing riffs form a steamroller that rolls evenly over the listener without – and that’s probably one of the magic moments in the art of the band – lacking dynamic. Another exciting element is that the war correspondents prefer traditional song patterns and intersperse only a few breaks and tempo changes, but these things are not at the expense of excitement or quality. Of course, some of the eleven tracks are “only good” and not outstanding, but that’s not the crucial factor here. What really counts is that Bolt Thrower have written another homogeneous and authentic work. They stay loyal to their supporters and to themselves and the overall standard of the here presented tunes will not disappoint any follower of the quintet.

On the other hand, I’m pretty sure that the quintet did not get many new fans with this output. The riffs do not differ significantly, tradition kills any trend and Bolt Thrower present exactly what they are - just themselves. No frills, no gimmicks, no bullshit. Precisely this attitude made the band to something special. The entire album can be summed up with the first line of 'Celestial Sanctuary'. Karl Willets growls “as the sky turns black” and even though many extreme metal bands create certain blackness, the one of Bolt Thrower is probably the most holistic one. The headstrong approach almost leads to a love-it-or-hate-it situation, but only fools would vote for “hate”. Thus, it’s just an effort everybody with at least one living brain cell enjoys.

If there is a detail that separates this release from the remaining discography of the group, then it is the non-puerile artwork. But their music has never been childish – and so The IVth Crusade marks one more soundtrack for a terrible military conflict. Perhaps the band is possessed by the war themes, but the - incomplete - list of wars which is presented in 'Through the Ages' makes clear that this topic is sheer endless. And so I can assure you that the disc is a typical Bolt Thrower work, full of tragic moments, ever-flowing pain, will to live in view of piles of corpses, mainstream-despising heaviness, grinding and simultaneously accusing guitars, pretty monotonous yet solid vocals and an appropriate, dense and guitar-dominated mix. Where is the death metal combo that can release comparable stuff? Just Before Dawn from Sweden comes to mind, not only because of the temporary involvement of Dave Ingram, the substitute of Willets on Honour – Value – Pride. However, one thing is for sure. Bolt Thrower, we miss you.